Wat Saket or the Temple of the Golden Mount, Bangkok, is an ancient temple dating back to the Ayutthaya Period. Find out more about this magnificent Temple in our latest article.

Nestled in the Pom Prap Sattru Phai district lies the Wat Saket Golden Mount, a buddhist temple dating back over three hundred years. A landmark of the city, every year countless tourists and locals alike seek out the temple for its history, beauty, and spiritual significance. Situated at the top of the most prominent hill in Bangkok, the site is made even more striking by its incredible coloring, architecture, and layout. Hidden within its walls are centuries worth of stories, all within reach of any visitor curious enough to make their way up its three hundred steps. 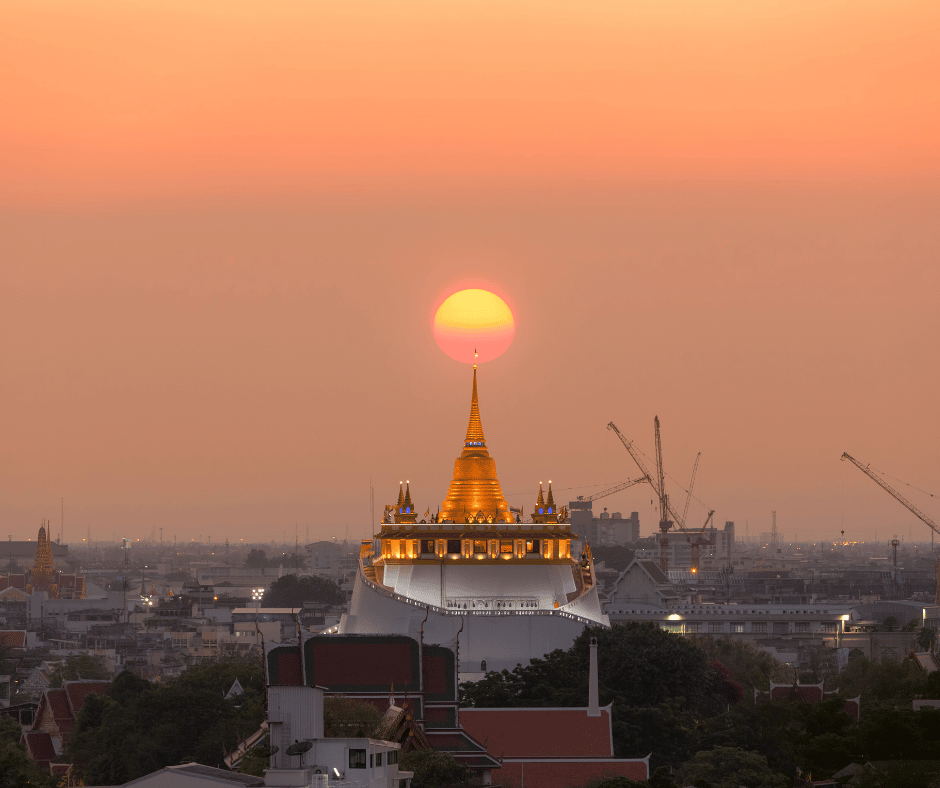 There are plenty of tour guides out there promising you unique insight into Wat Saket Golden Mount Bangkok, but let’s take a step back and start from the beginning.

Although its golden stupa can be seen from a fair distance, the exact location of the Wat Saket Golden Mount can be difficult to find in the winding roads of Bangkok’s Old Town. Otherwise known as Rattanakosin Island, Bangkok’s Old Town is an island in only the loosest terms, as it is surrounded by a broad canal. This historic area was previously considered a fortified city center, with the entire area being a wonderful accumulation of Bangkok’s oldest buildings and historic sites. If you’re considering visiting the Wat Saket Golden Mount Bangkok, it is recommended that you set aside just as much time to explore Bangkok’s Old Town. 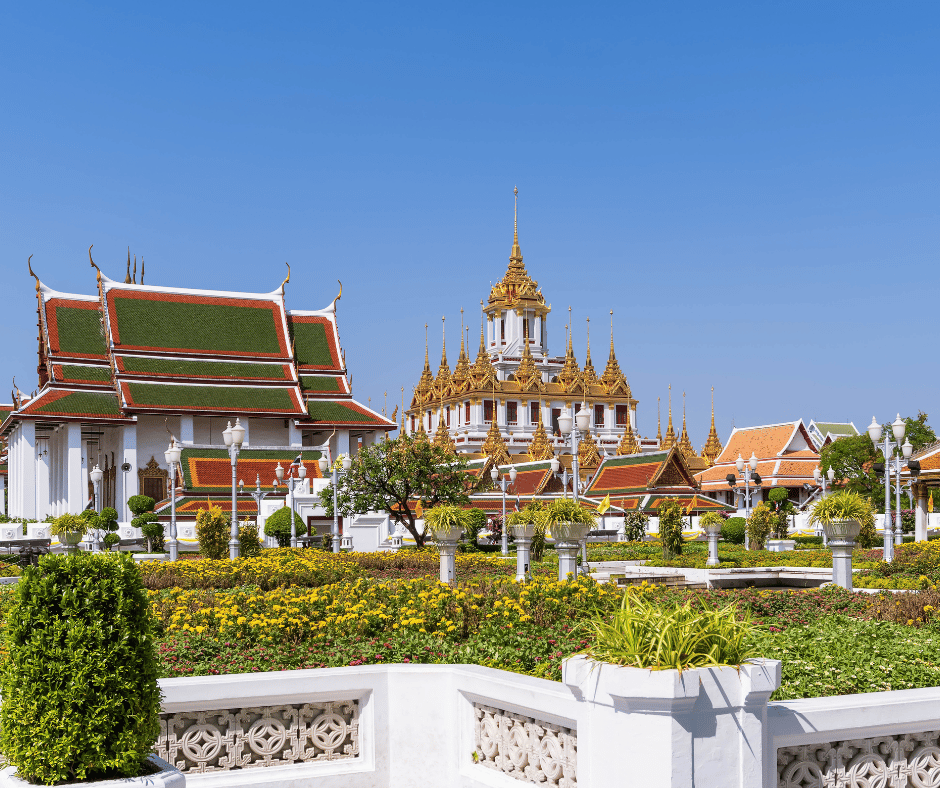 Widely regarded as one of the oldest temples in Bangkok, Wat Saket Golden Mount was built in the Ayutthaya period, which spanned from the 1300s to the 1700s. However, it has been continuously renovated and improved by various monarchs since its completion, most notably by King Rama V, making it a living embodiment of both traditional and modern Bangkok. The lower temple is its oldest feature, while other features, such as its golden mount, were built much later. At the completion of its last renovation, a relic related to the Buddha was brought to the temple grounds. This has made the site even more of a fascinating, one-of-a-kind location to visit.

In one of its many renovations, Rama III wanted to add an artificial hill with a large chedi, also known as a stupa. In Thai Buddhist architecture, a chedi is a mound-like structure with a pointed center. These buildings traditionally serve as sites for meditation, worship, cremations, and the celebration of local festivals. However, the ground and climate of Bangkok made this task difficult, and soil instability paired with poor water drainage soon made the structure collapse. A smaller chedi was then built in its place, where it still stands today. 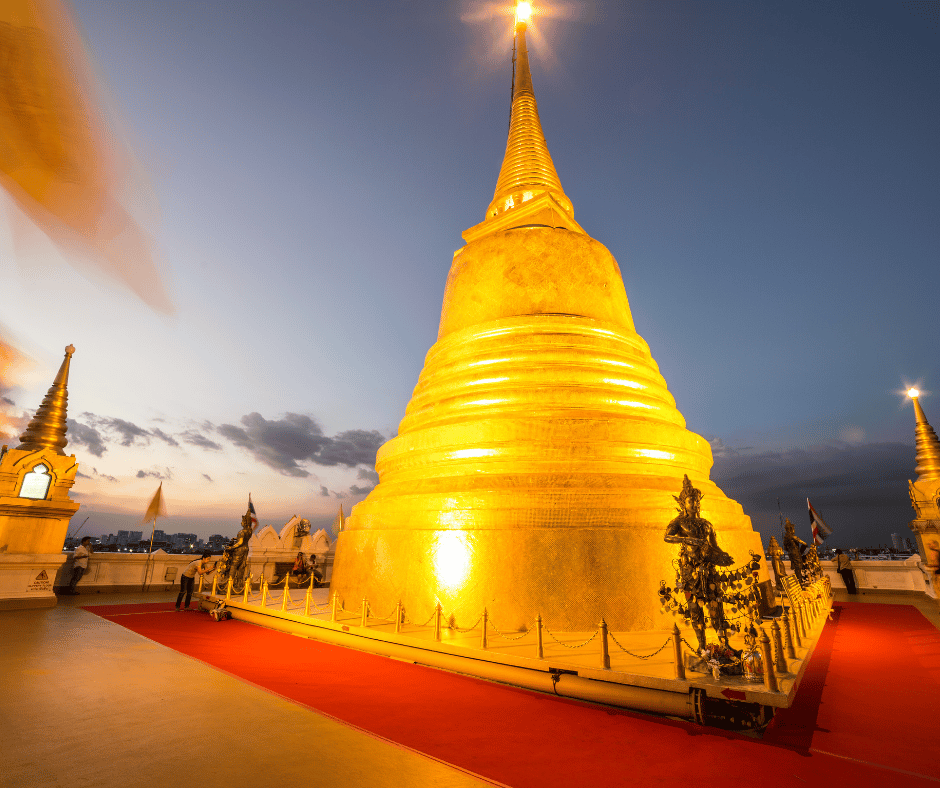 Locals have dubbed this site the “golden hill”, as the first thing you will likely see as you approach the area will be the golden top of Wat Saket Golden Mount’s stupa. The entire site measures in at just under 80 meters, or approximately 270 feet, in height. That’s about as tall as a 24-story building. The site is made even more impressive by the beautiful and striking colors that adorn it. As mentioned, the stupa is gilded a vivid yellow-gold. This sits atop a brilliant white mount, a complementary pairing that makes the site seem even larger and more enchanting.

This structure is perhaps not as ornate as other temples in the city, but it does offer an allure all its own. The sheer size of the site allows you to appreciate the delicate architecture that adorns this simple stupa. Visitors, especially foreigners who are unfamiliar with Buddhist teachings, should take a moment to understand what a stupa represents to Buddhists. Traditionally, a stupa is said to be an abstracted symbol of the Buddha stylized in meditation posture. However, the exact shape and structure of the stupa is different from region to region. For example, Chinese stupas are influenced by Chinese pagoda architecture, which may appear like tall buildings with layered roofs, while Nepalese stupas tend to be flatter with a more domed center topped by a spire.

In a similar fashion, Thai chedis offer a wholly unique style while retaining the essential form of a stupa. There is no better example of this than Wat Saket Golden Mount Bangkok, which exemplifies Thai Buddhist architecture in many ways. If you visit enough stupas during your stay in Thailand, you will undoubtedly understand the style we’re referring to. Thai stupas tend to be gilded a brilliant yellow-gold, with an angular geometric base and a rather thick dome or vase. This is often topped by a tall, elongated spire. On Wat Saket Golden Mount, you will also notice a muted red accentuating the site through its stairs and the base of the stupa, lending it depth. 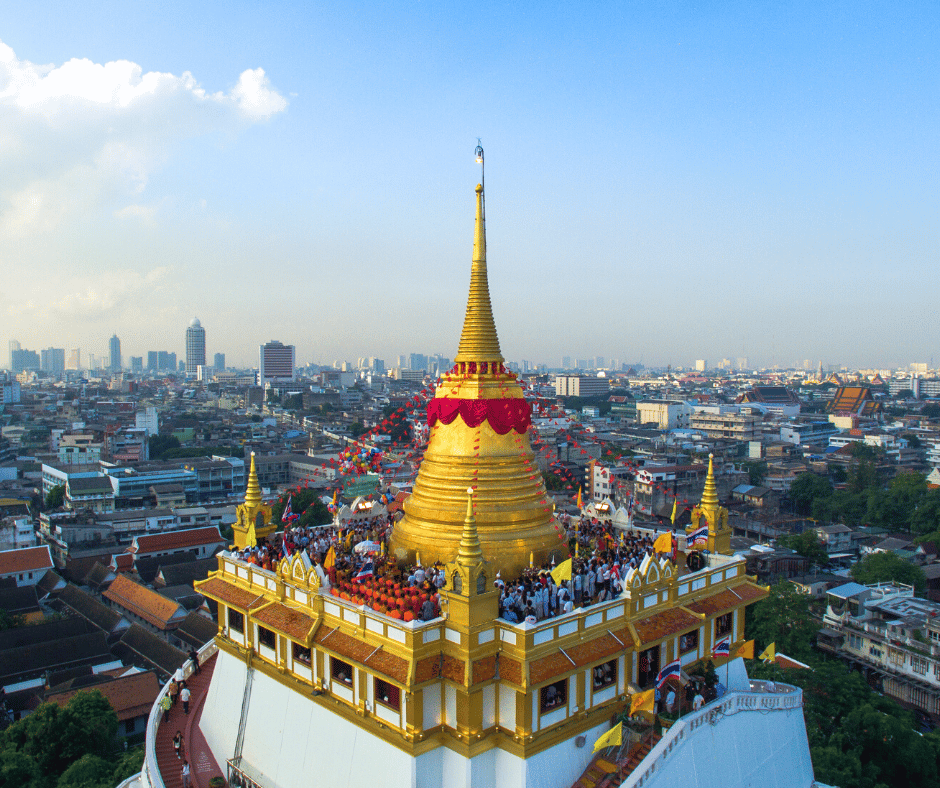 However, as much as the architecture and design of Wat Saket Golden Mount can be appreciated in theory, nothing will be as beautiful as taking in this site in-person, which includes lovely statues, waterfalls, and a cozy cafe.

As a prominent site for visitors, Wat Saket Golden Mount can be accessed in a number of ways. Of course, you can take a taxi or bus, as well as the Metropolitan Rapid Transit, which has a metro station in Sam Yot, just a fifteen minute walk away from the site. Wat Saket Golden Mount is open every day, 7:30 am to 5:30 pm Tuesday to Sunday, and 7:00 am to 7:00 pm on Monday. However, it may close on public holidays, so be sure to check before you plan your trip. You may also be lucky enough to visit Wat Saket Golden Mount on a festival day, where you will enjoy an elevated ambiance. The entrance fee is ฿50.00 (Baht), which is just under $2.00 (USD).

As we mentioned previously, although viewing Wat Saket Golden Mount is an incredible experience in its own right, Bangkok’s Old Town has so much more to offer. A major part of the charm of Wat Saket Golden Mount is its connection to its surroundings. Approaching the site from a distance, the first indication of its existence can be seen from the very top of its spire, peeking out from in between buildings. As you get closer, the stupa and the mount will appear, building your anticipation. This is why we recommend getting there on-foot. This gives you a real chance to form an intimate connection with Bangkok’s Old Town, exploring local treasures few tourists venture into. However, this can be a daunting task for visitors and some may feel insecure and deterred from undertaking this journey alone.

We have stricken the perfect balance between local immersion and sightseeing, with our Electric Scooter Tour through Bangkok Old Town. This experience gives you an opportunity to take in Bangkok’s Old Town from the ground up, mingling in Bangkok’s traditional amulet market, checking out Thammasat University, and venturing into The Grand Palace, among many other stops in unique places. Not the least of which will be Wat Saket Golden Mount, where you will get a chance to take in the awe-inspiring 360-degree view of Bangkok’s Old Town from its highest point. The perfect way to get a taste for everything Bangkok’s Old Town has to offer. 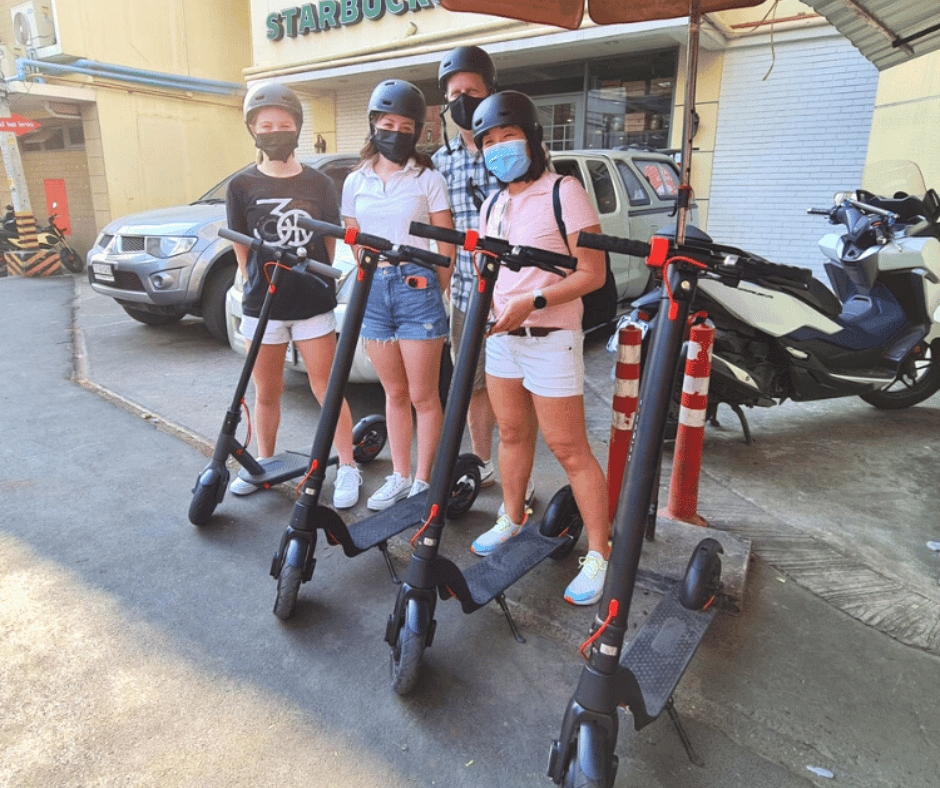