During the Reign of Siam, many Italian buildings in Bangkok were constructed by architects and artists who worked at the court, leaving a tangible sign of Italian excellence in the arts and architecture. In this article you will find a list with a brief description of the works of these architects, painters and sculptors in central Bangkok.

Talking about Italian buildings in Bangkok, Every year, Western visitors flock to this city, attracted by the spectacle of glittering exotic temples. Some may note that many great old buildings tend to be European in style, conveying the influence that Italians once had in early Bangkok. King Chulalongkorn (Rama V), who ruled from 1868 to 1910, diverted tremendous resources into transforming Bangkok into a modern city and had a great passion for art and architecture especially for neo-classical and Renaissance styles. A ministry of public works was founded during his reign and staffed with a large number of Europeans, mostly from Italy. It is still possible to see today the tremendous impact they had on the rapidly growing region.

In 1889, the Ministry of Public Works was formed to oversee the modernization program. The Public Works Department was in charge of constructing major buildings within the Ministry. Carlo Allegri, a civil engineer from Milan, entered the department in 1890 and became the director of the department one year later. Allegri soon recruited a few more of his countrymen to the department and the numbers quickly increased to more than twenty Italians after 1902, whose expertise in engineering, design, marble cutting, sculpture and painting oversaw a boom in Bangkok’s great neo-classical and Renaissance architecture. 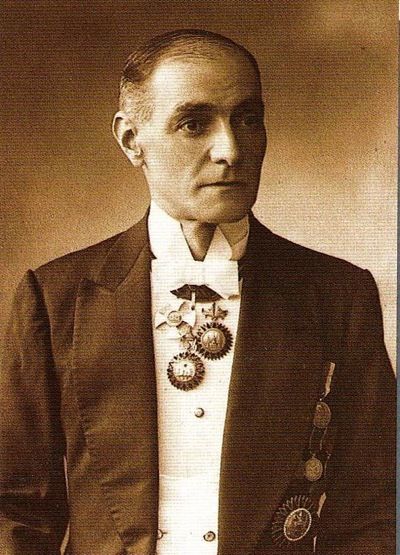 Turin’s Mario Tamagno was hired as the head of the Architectural Division in 1901, a position he continued to hold for 24 years. In 1907, as Chief Architect for one of the King’s main projects, Annibale Rigotti, also from Turin, entered the department. Allegri, Rigotti and Tamagno went on to partner on some of the most prominent landmarks in Bangkok. Hua Lamphong Railway Station, built between 1910 and 1916, is one of the best known. Tamagno based it on Paris’s La Gare de l’Est, giving it the renowned sweeping arched steel roof, neo-classical entrance, and stained-glass windows. 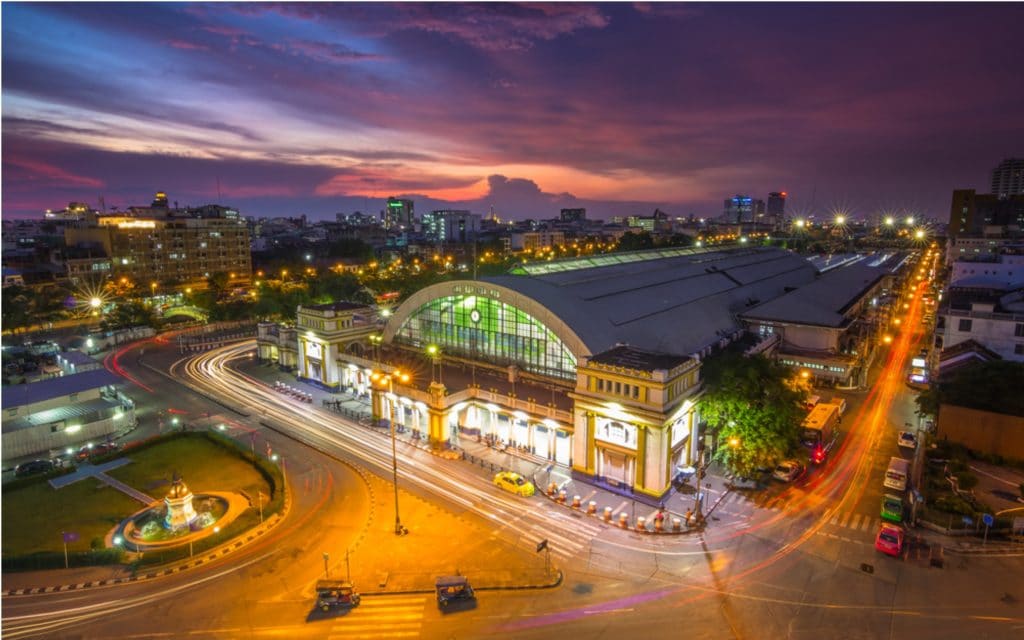 Perhaps the most famous Italian buildings in Bangkok from this period is Wat Benchamabophit, most often remembered by visitors to Bangkok as “The Marble Temple”. 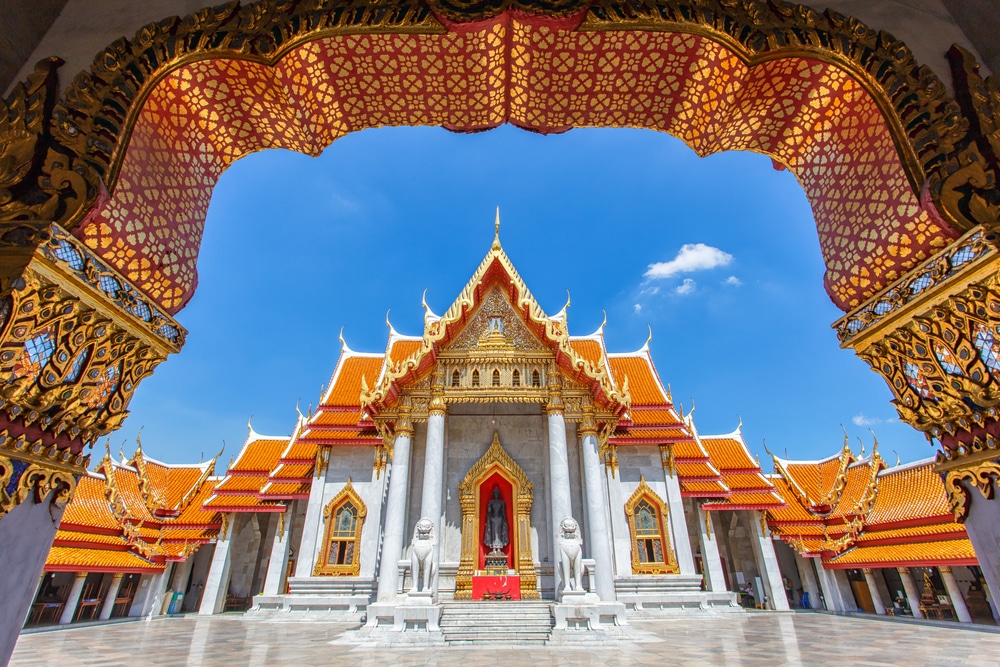 Construction of Wat Benchamabophit started in 1890 as a new royal temple affiliated with nearby Dusit Park’s newly built palace. The half-brother of Chulalongkorn, Prince Naris, was in charge of the construction, but it was Carlo Allegri who recommended the use of white Carrara marble to cover the building and who also arranged for King Chulalongkorn himself to pick the stained glass for the windows when he visited Milan in 1907. 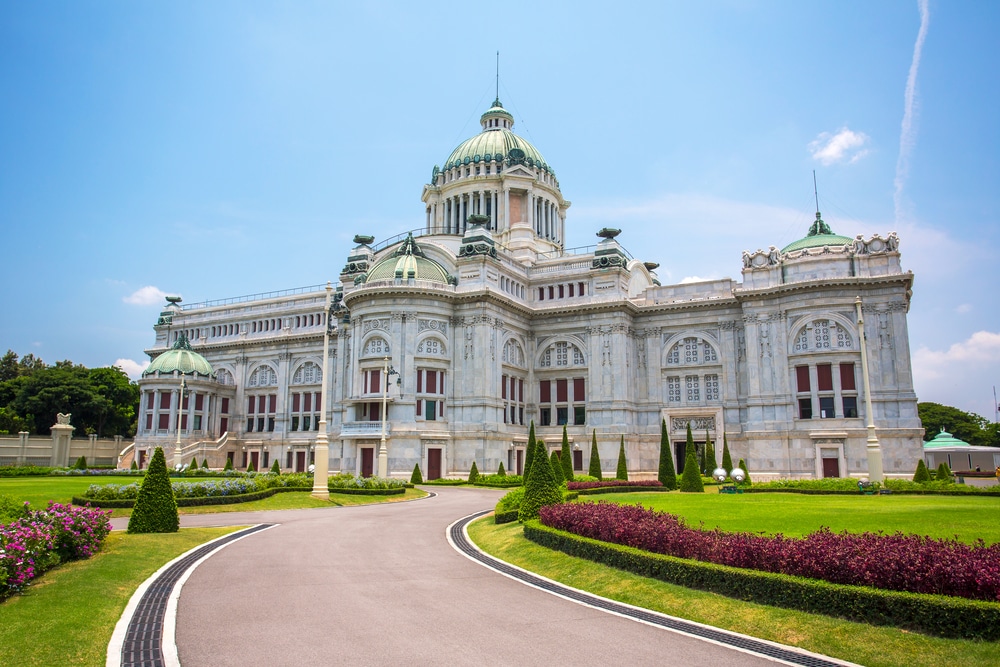 The Ananta Samakhom Throne Hall is probably the most famous of all the Italian buildings in Bangkok. Commissioned after his Grand Tour of Europe in 1897 by King Chulalongkorn, this was the project for which, together with a host of other Italian experts, Annibale Rigotti was brought to Bangkok. Tamagno and Rigotti settled on the Renaissance-Baroque style after beginning work in 1907. Again, they wanted to clad the building in Carrara marble, which compounded the engineering issue of how to build such an incredibly heavy building on soft marshy terrain, weighing around 1500 tons alone in the main central dome. It took over two years to solve that specific problem, and finally some French “Compressol” technology. Meanwhile, importing marble from Genoa, Turin, Milan and Carrara; copper and bronze casts from Stuttgart; ceramics from Vienna; and draperies and carpets from England, the King spared no costs for this initiative. Monumental paintings by Galileo Chini depicting important events of the Chakri dynasty adorned the interior.

Construction of this Italian buildings in Bangkok masterpiece was not finished until almost five years after the death of King Chulalongkorn in 1915. The building was never used by his successor as a throne hall for which it was intended. It was used as the National Assembly between 1932 and 1974, but today it is seldom used and seldom open to the public, sadly. 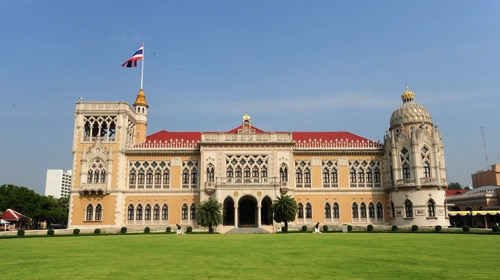 The neo-Venetian Gothic Palace Villa Norasingh was one of the later buildings of this Italian turn-of-the-century era. It was designed by Annibale Rigotti and Ercole Manfredi and it was built in 1923 by King Vajiravudh (Rama VI) for General Chao Phraya Ram Rakhop.

Manfredi entered the Department of Public Works in 1909 and continued to remain in Thailand as a naturalized citizen for the rest of his life until 1973. Manfredi regretted his architectural choice for Villa Norasingh in later years, saying in 1967, “I built it in the Venetian style because I thought Bangkok was the Venice of the East.” I’m so ashamed of it now.’

This building now serves as the House of Parliament, the office of the Prime Minister. Tight security, sadly, makes it hard to visit most days. 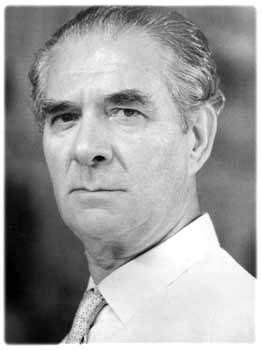 Among the most important Italian persons working in Thailand, Corrado Feroci must be mentioned. Born in Florence, Italy’s art capital (1892-1962) he was a graduate of the Academy of Fine Arts. He first came to Bangkok in 1923 when King Rama VI asked the Italian government for a sculptor to train Thai artists and craftsmen in order to lift the standards of Thai art to international levels.

Feroci’s arrival was the beginning of a series of activities that would have a profound e effect on the growth of Thai art.  He began with the Department of Fine Arts as a sculptor and taught sculpture to art graduates. Later, the Thai government asked him to plan the curriculum and the textbooks for the artists’ formal training. The Silpakorn School of Fine Arts was founded with a formal teaching structure in place, with Corrado Feroci as the first director in 1937. Feroci was granted Thai citizenship in 1946 in recognition of his contributions, and changed his name to Silpa Bhirasri. Among his most famous monuments there are the following which could be viewed in Bangkok: The Democracy monument, the Victory monument and the King Thaksin Memorial. 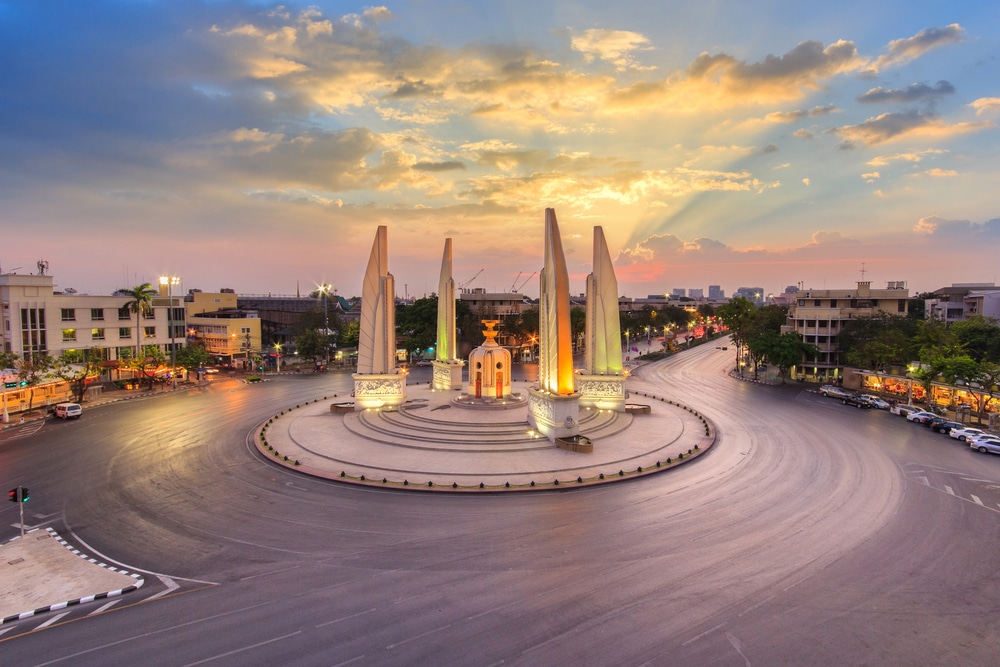