Bangkok is definitely a city that impresses its visitors, did you know there's a building that resembles an elephant? Below our unusual buildings in Bangkok

Bangkok is definitely a city that impresses its visitors, did you know there was a building that resembles an elephant? Below our list of unusual buildings in Bangkok 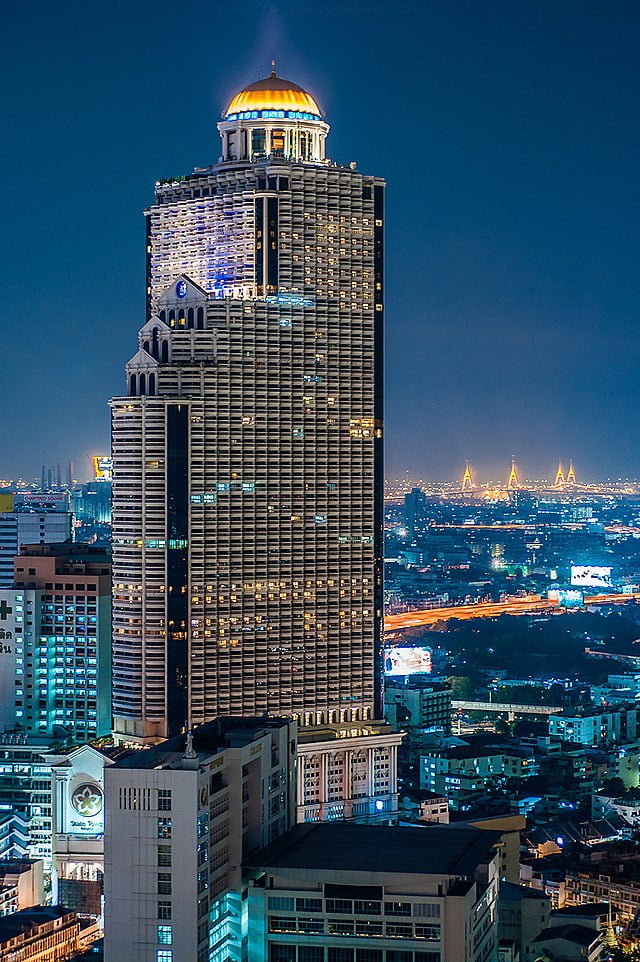 Travelers are able to recognize State Tower as the home of the award-winning Mezzaluna restaurant and Sirocco sky bar and for the famous movie “Hangover”; some of its scenes were shot in its rooftop bar. However, this high-rise building is a rare wonder for architecture lovers. The 68-story building was designed in neoclassical style by renowned architect Rangsan Torsuwan. Some of its more distinctive features are the identical curved balconies coming out from each of the apartments and a golden dome in the roof. 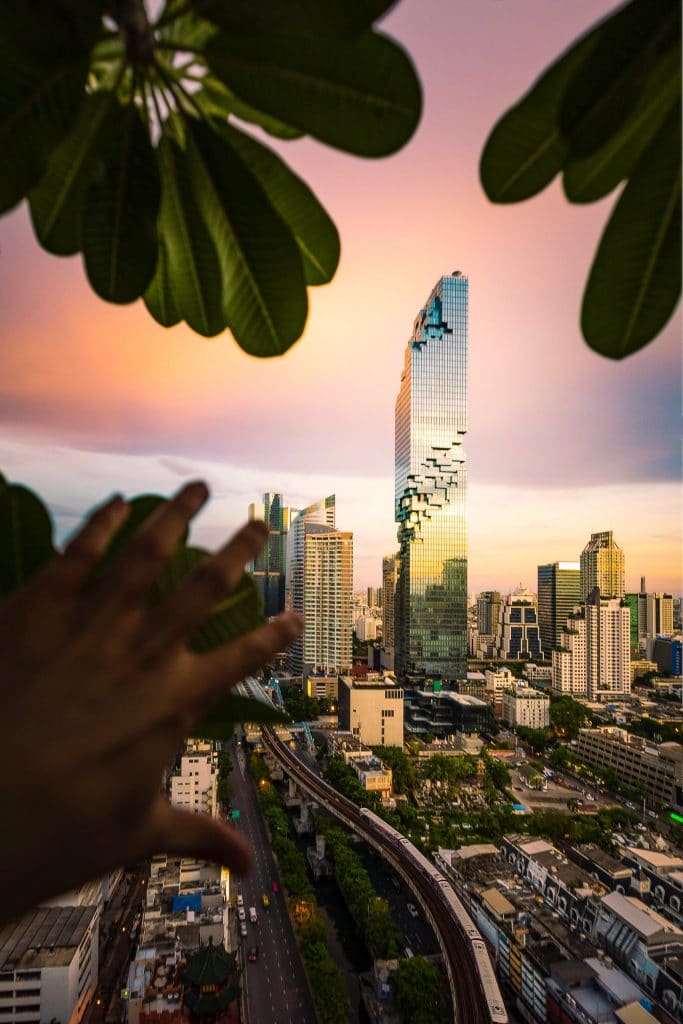 More commonly known as the Pixel or Tetris building, after its grand opening in August 2016, it has been declared the highest building in Bangkok surpassing Bayoke Tower. The most unique attribute of the skyscraper is the winding, 3D pixel design that loops around the tower, as its nickname suggests. Coming in at 314-meters tall, it is officially Thailand’s tallest building and occupies roughly 15,000 square meters of land in the capital’s business district. The word MahaNakhon comes from Bangkok’s official name, and means “big metropolis.” The design of the tower was definitely not a budget-friendly job, and the overall construction cost has been around $22 billion. 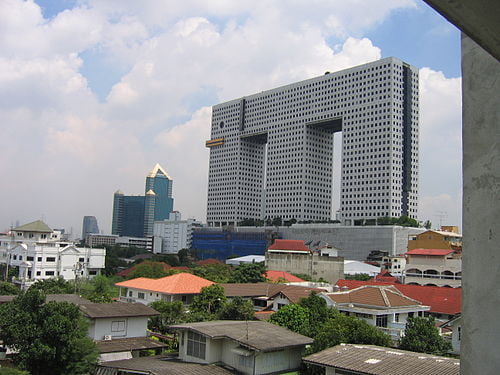 From many places in Chatuchak area you can see the best views of this iconic structure. The dream of real estate Guru Arun Chaisaree and architect Ong-ard Satraphandhu, the building pays homage to the animal that Thais hold in high reverence. Three towers serve as the trunk and legs of the elephant, bridging seven floors of executive suites. Elements representing ears and tusks also appear in the building. It was recognized by CNN as one of the most unusual buildings in the world. 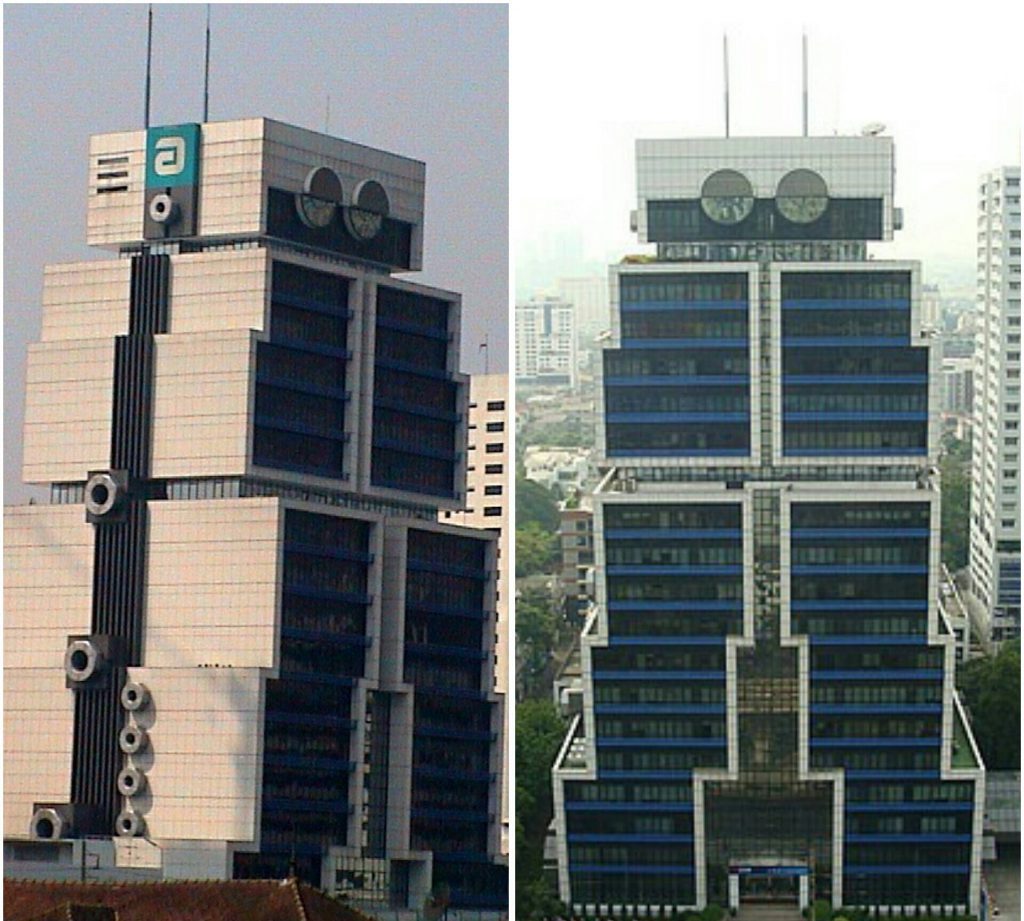 Imagined like a sleeping robot, this building — now United Overseas Bank headquarters in Bangkok — brings a childish fun to the urban landscape of Silom. The Robot Building was originally the Bank of Asia headquarter designed by the Thai Artist Sumet Jumsai, to reflect computerization in the banking world. The 20-story building narrows up to create the body of the robot on some floors. Circular windows on the top floors depict lidded eyeballs, while robot-like components such as nuts and bolts are decorated on the sides of the building. For communication and lighting purposes an antenna is used on the top the building. 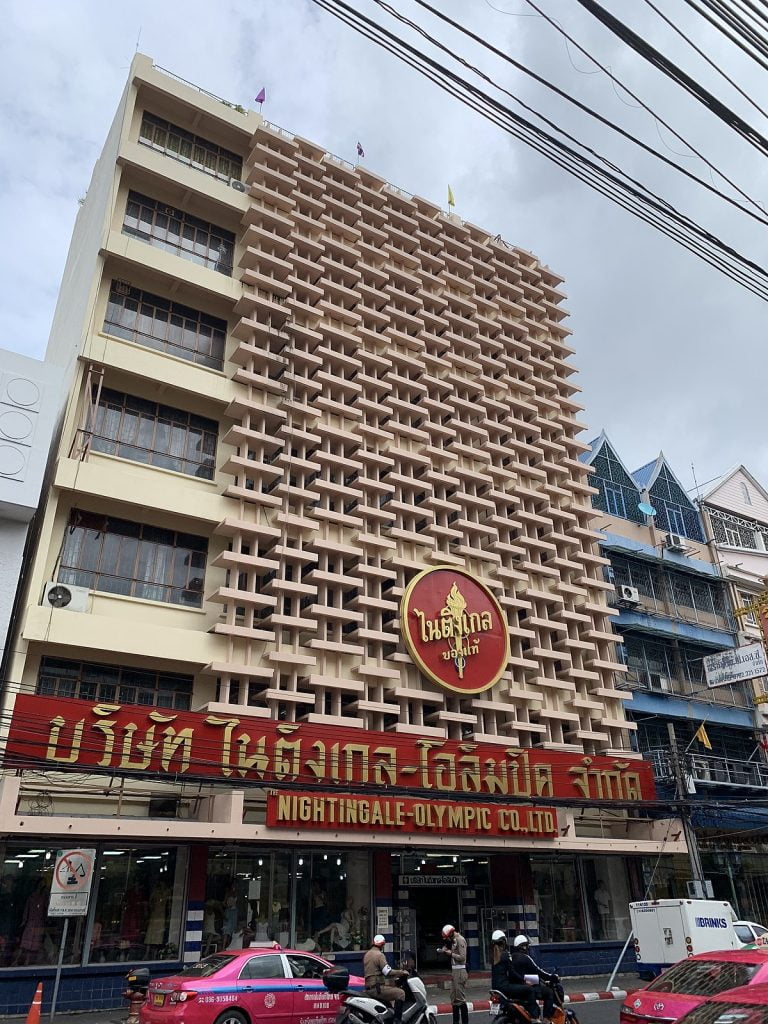 The Nightingale Olympic is another unusual buildings in Bangkok and it is the oldest department store operating in Thailand, it is a testimony to its history. Arun Niyomwanich, the nonagenarian sister of founder Nat Niyomwanich, now runs the retail company. The multi-level, non-air conditioning store retains the original structure’s retro charms and features dusty sports equipment, musical instruments, rare cosmetics, and mysterious-looking mannequins.

Robert G. Boughey and Associates are the designers behind the ground-breaking Bangkok Art and Culture Centre. This art centre functions mainly as a museum but is also home to several galleries, cafes, bookstores and other facilities designed to help tourists embrace their creativity. The building is in triangular form, with gallery spaces wrapping across the edges of the central atrium offering ample natural light through a skylight. The building ‘s architecture incorporates a deliberate mix of both natural and artificial light to better highlight all art pieces. 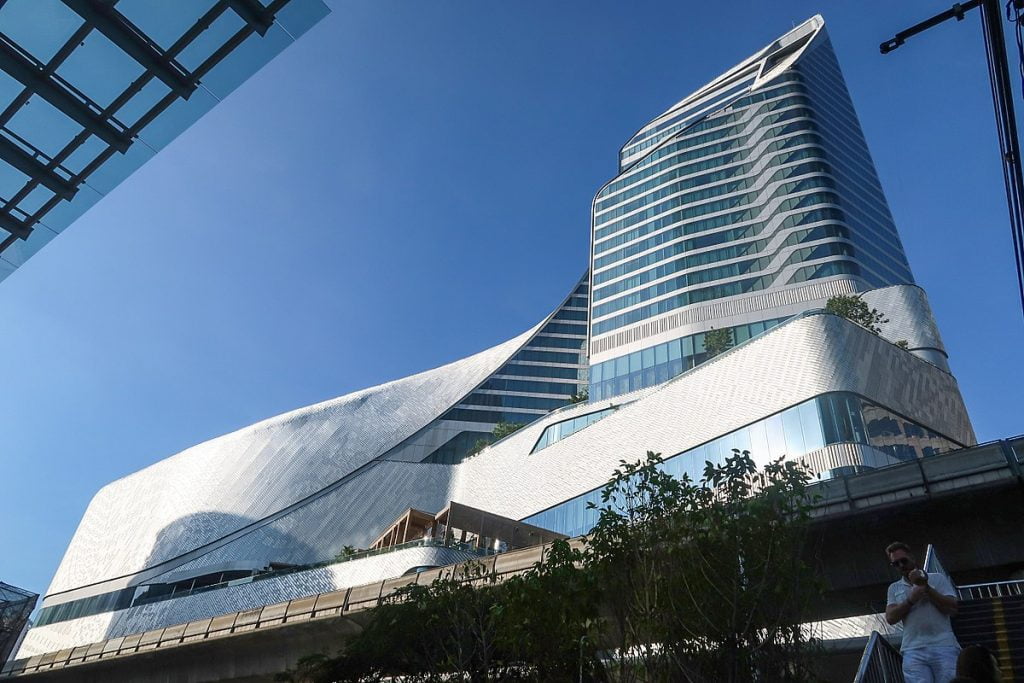 Central Embassy is an unusual buildings in Bangkok and it is a six-story shopping centre packed with fashion, architecture, beauty and dining options from luxury brands. The contemporary structure is built to be both efficient and trendy, with a curving exterior showcasing the names found inside the iconic designer labels. The mall costed more than 18 million dollars to be completed. Although its exterior is certainly noteworthy, the interior of the Central Embassy is almost all white, offering a luxurious shopping experience for visitors.