A Guide to Wat Pho Bangkok

Wat Pho Bangkok is best known for housing one of the biggest Reclining Buddha statue. If you want to find out more regarding this mesmerizing Temple check this article!

Wat Pho Bangkok, or Wat Phra Chetuphon as it is known among Thais, is best known for housing one of the biggest Reclining Buddha statue. It is located in Bangkok old Town not faraway from Bangkok flower market which can be reached on foot. Although the image is sometimes referred to as the reclining Buddha or the sleeping Buddha, the Reclining Buddha shows the passing of the Buddha into final Nirvana stage. It is the largest Wat (Temple) in Bangkok, with a total area of 20 acres, and it is also the oldest, having been built about 200 years before Bangkok became Thailand’s capital. However, the Wat today bears no resemblance to the original, as it was nearly entirely reconstructed by Rama I when the capital was relocated to Bangkok. The Temple is home to Thailand’s largest reclining Buddha image as well as the country’s largest number of Buddha images. 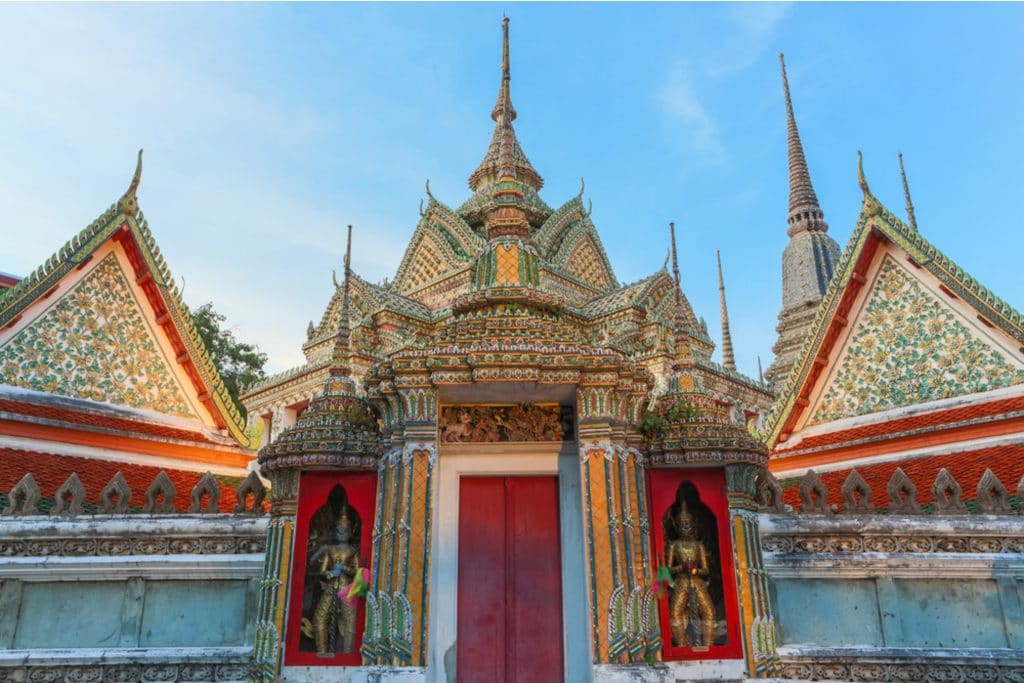 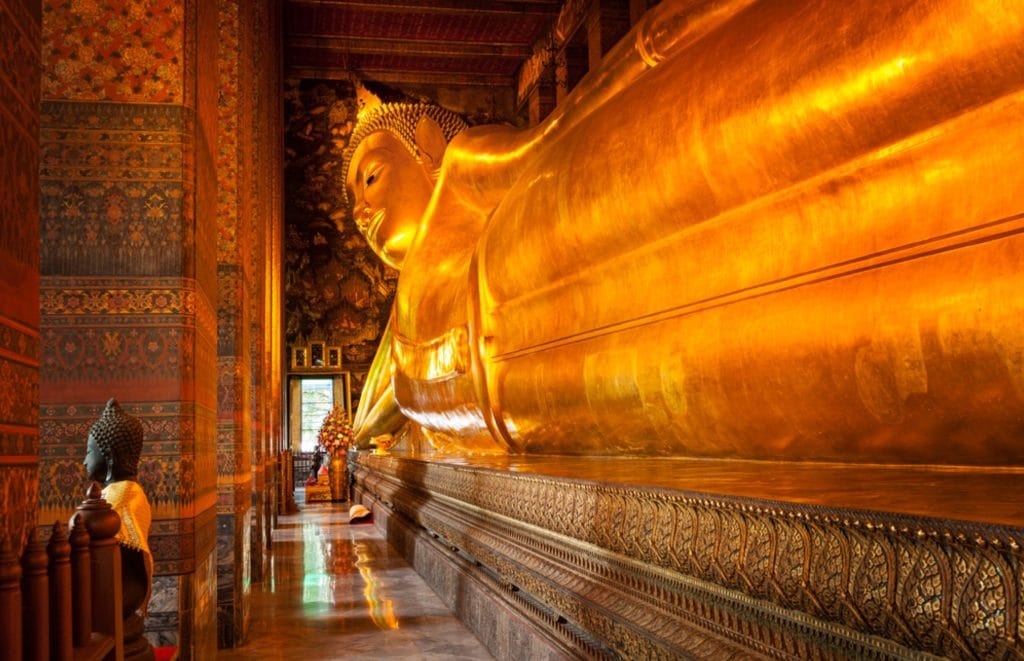 The main Buddha image is “Phra Buddha Deva Patimakorn” in a seated Buddha gesture on a three-tiered pedestal known as Phra Pang Smardhi (Lord Buddha in the posture of concentration), with some ashes of King Rama I held beneath the pedestal. The hall’s mural paintings depict Mahosatha Pandita (Mithila City’s Great Bachelor), the heavens, and Phra Etadagga, a disciple. The Original Disciples are represented by two portraits on the middle tier, while the Holy Priests are represented by eight effigies on the lowest pedestal. The seals of these monastery dignitaries are lacquered on the inside panels of the windows (during the reign of king Rama 3). 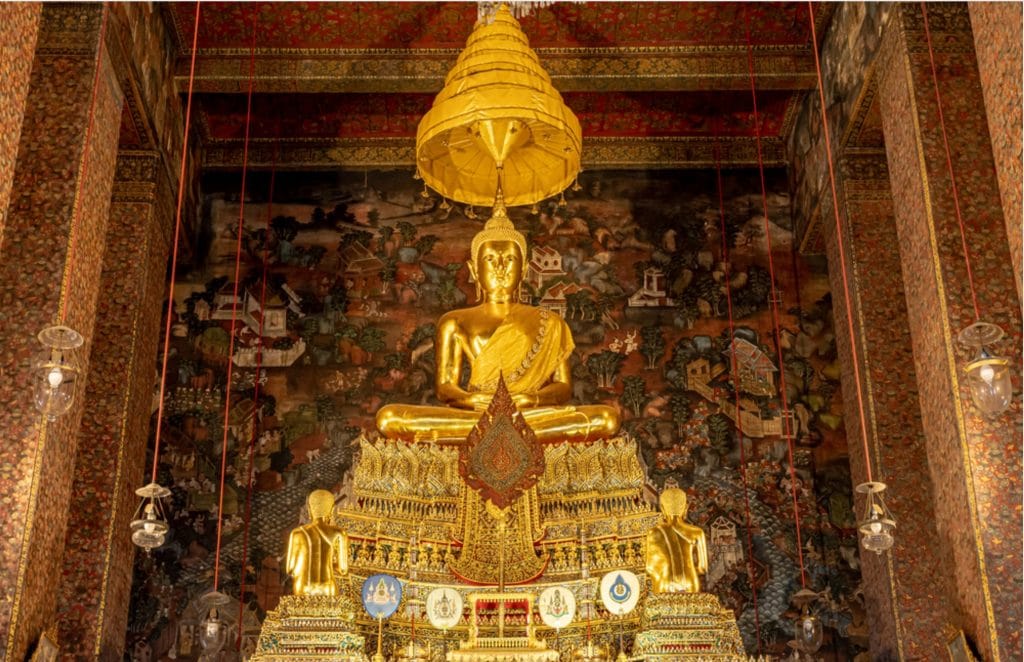 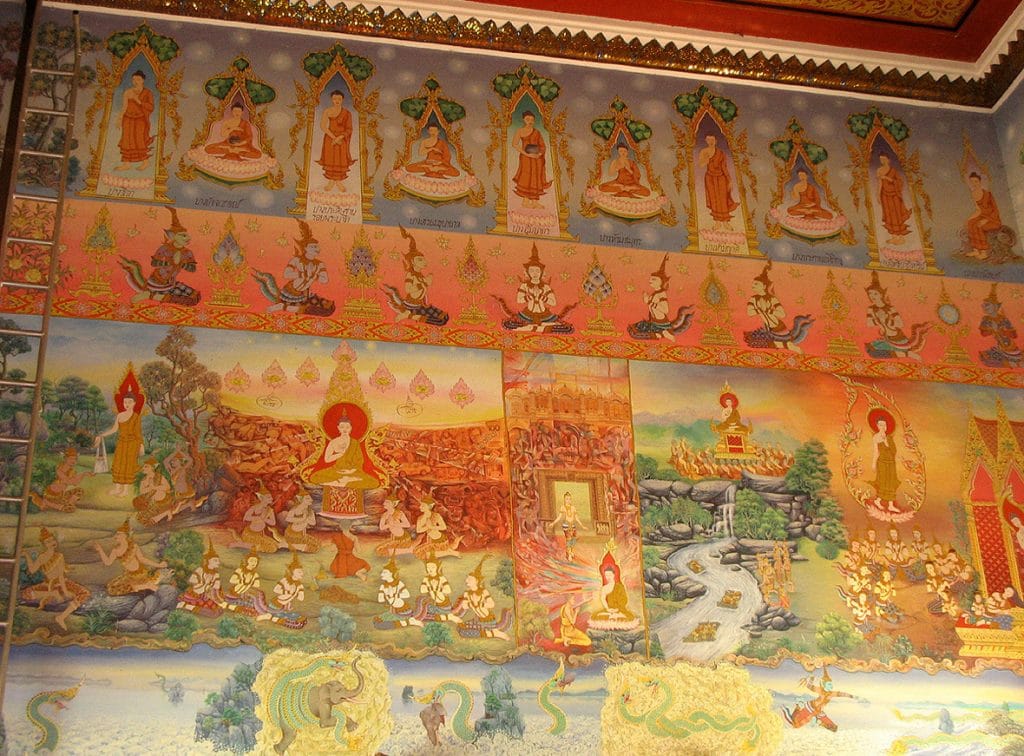 The 46-meter-long and 15-meter-high gold-plated reclining Buddha is meant to represent the Buddha’s ascension into nirvana. The mother-of-pearl decoration on the feet and eyes, as well as the 108 auspicious characteristics of the real Buddha, are etched on the feet. Wat Pho’s vast grounds house over 1000 Buddha images, the majority of which came from the ruins of the former Thai capitals of Ayuthaya and Sukhothai. 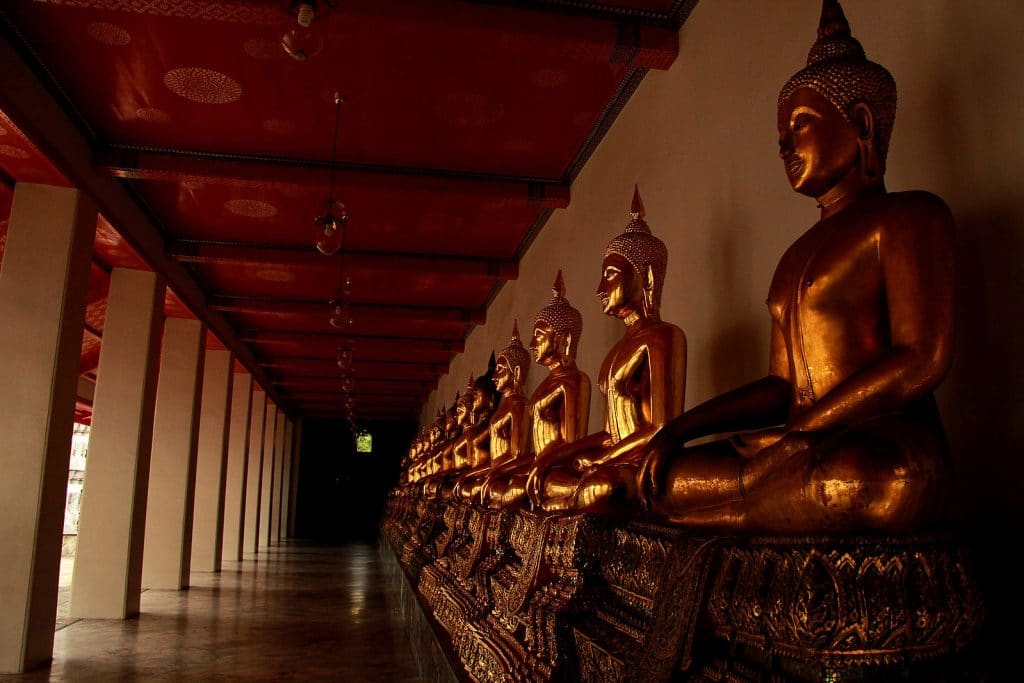 Chetuphon road divides the grounds in two. The northern portion, which includes a massive bot (temple hall) encircled by 394 bronze Buddha images, is usually the only one most people visit. There are 152 marble slabs outside the bot that represent the second half of the epic Ramakian story. Nearby, there are four chedis dedicated to the first three Chakri kings (untill King Rama III). There are also 91 smaller Chedis scattered across the grounds, as well as chapels, rock gardens, a variety of sculptures, inscriptions, bell towers, and resident fortune tellers. The library is also close by, and it is similarly decorated with porcelain figures and pagodas as Wat Arun across the river.

What else is there to see at Wat Pho Bangkok?

It’s well worth your time to explore the rest of the temple. Wat Pho also has excellent English-speaking guides who can provide interesting knowledge for about 200 or 400 baht, depending on the size of your group and your negotiating skills. You can go off on your own if you want. 4 chapels with 394 gilded Buddha images and long lines of golden statues from various parts of Thailand sitting in the lotus position are recommended locations. Although the intricately detailed murals that cover the walkways around Wat Pho would take a book or guide to decode, the beautiful murals are so detailed and intricate that you can still enjoy the artwork even if you don’t understand all of the imagery. Finally, there are some amusing-looking Chinese statues that were once used as ballasts on ships in the courtyards of Wat Pho Temple, as well as 91 chedis (stupas) adorned with ceramic pottery flowers and colorful tiles. 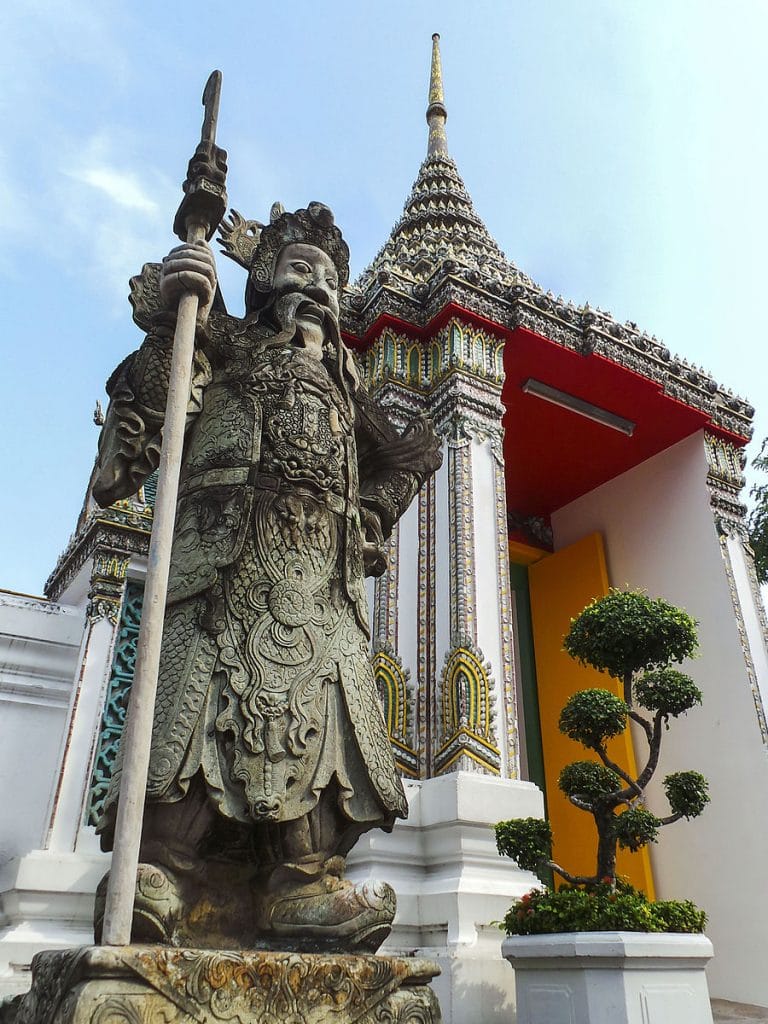 The soles of the Buddha’s feet

The Buddha’s soles, which are about 3 meters high and nearly 5 meters long, are inlaid with mother of pearl in 108 parts, depicting the Buddha’s 108 lakshanas or auspicious characteristics in great detail. 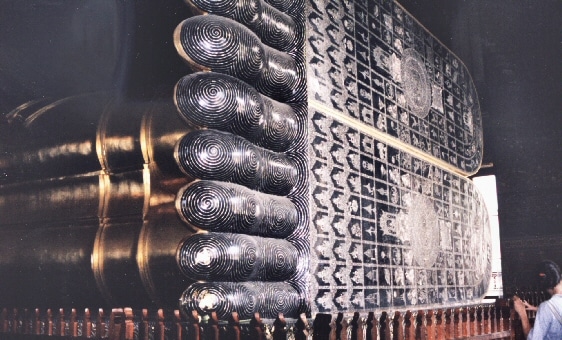 Along with the Phra Phuttha Saiyat image, there are 108 bronze bowls where people donate coins that are thought to bring good luck.

A Bodhi tree, a descendant of the Bodhi tree from Bodhgaya, India, where the Buddha attained enlightenment, can be found in a small garden next to the Reclining Buddha’s housing. 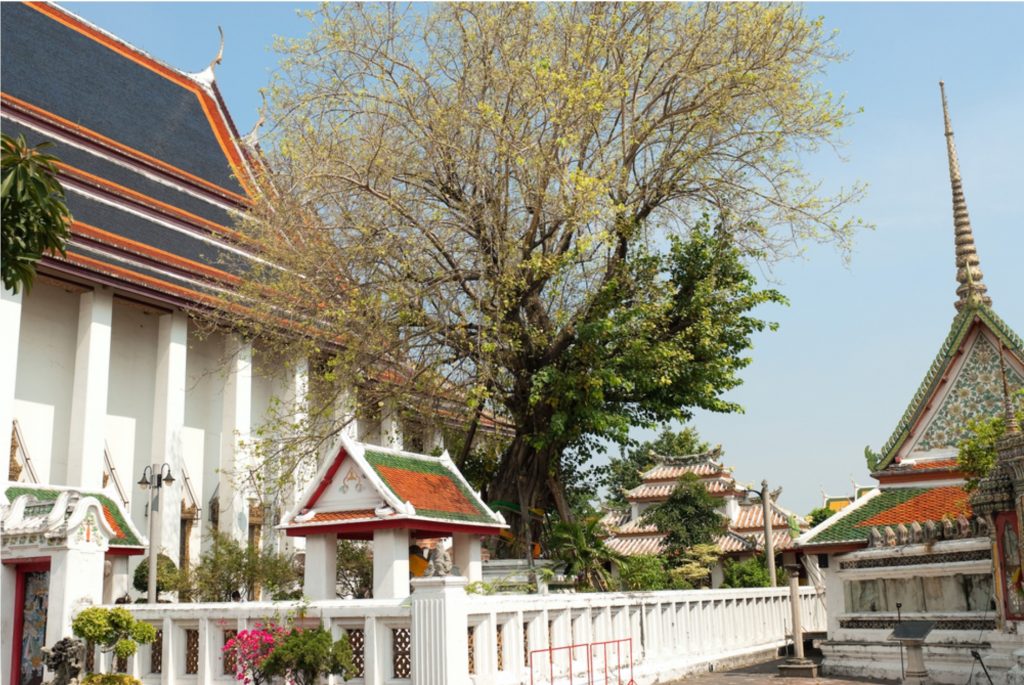 Wat Pho in Bangkok has a long history of traditional Thai medicine, including massage. The original temple, Wat Phodoram, was built in the seventh century, but the site had previously served as a centre for traditional medicine. When the ancient art of Thai massage was on the verge of extinction, the king Rama III saw fit to create what is now known as Thailand’s first university, where Thai medicine and massage practices are preserved and passed down to future generations. Wat Pho is now the national headquarters for traditional Thai medicine and massage preservation and education. 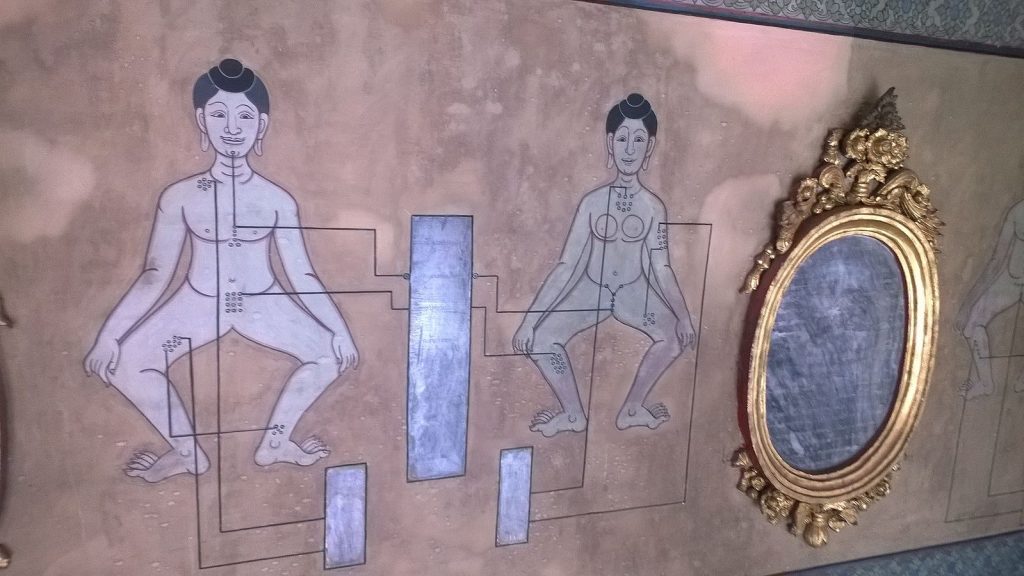