Khlong Saen Saeb is one of the last remaining canals in Bangkok where you can hop on inexpensive boat trips for less than a dollar per trip. Find out itineraries around Khlong Saen Saeb

Bangkok canals are well known around the world and as the Venice of the East, Bangkok gets its nickname from the myriad of canals scattered all around its surface. One way to truly experience local life and have a look at authentic communities is to explore Bangkok canals, especially the area around the Khlong Saen Saeb.

Khlong Saen Saeb, a canal in the center of the city, Khlong Phadung Krung Kasem, one of the first canals built around the Grand Palace, and Thonburi canal, located in a neighborhood on the western side of Chao Praya, are three of the most central and historically significant places to explore Bangkok canals. All are close enough together to explore them in one day. You may start at Khlong Saen Saeb, travel to the intersection with Khlong Phadung Krung Kasem and then encounter the khlongs on a tour of Thonburi’s narrow waterways. 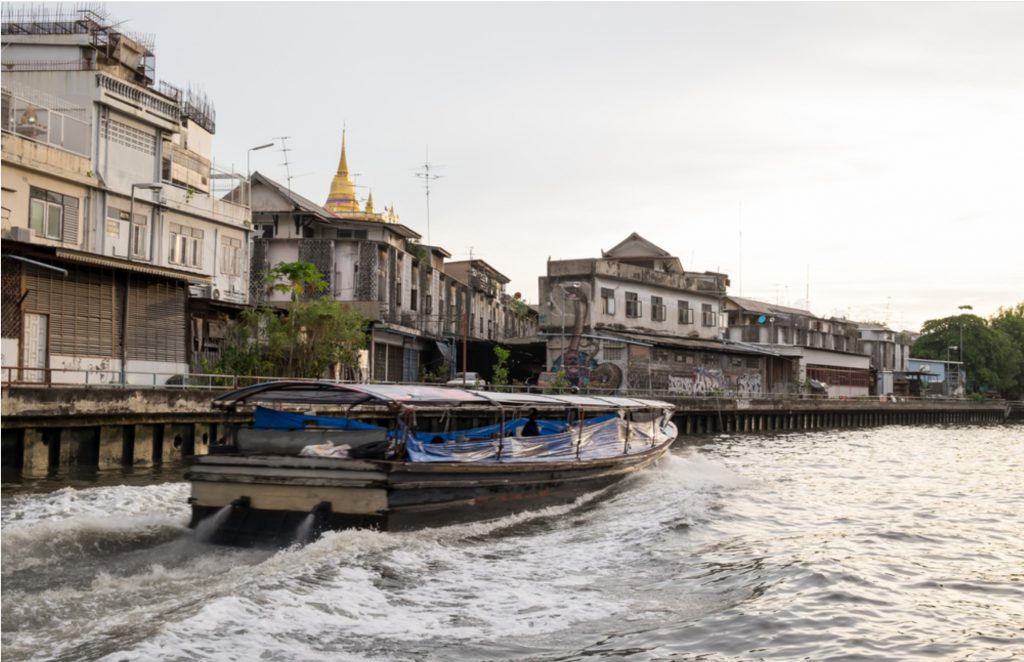 You may have heard that some of its parts are dirty and dangerous but the truth is that it is also a handy, vibrant and exhilarating place. Khlong Saen Saeb canal is one of the few remaining, in a city where skyscrapers pop up like mushrooms and it is one of the main waterway arteries that allow Bangkokians to avoid business districts’ rush hour terrific traffic. 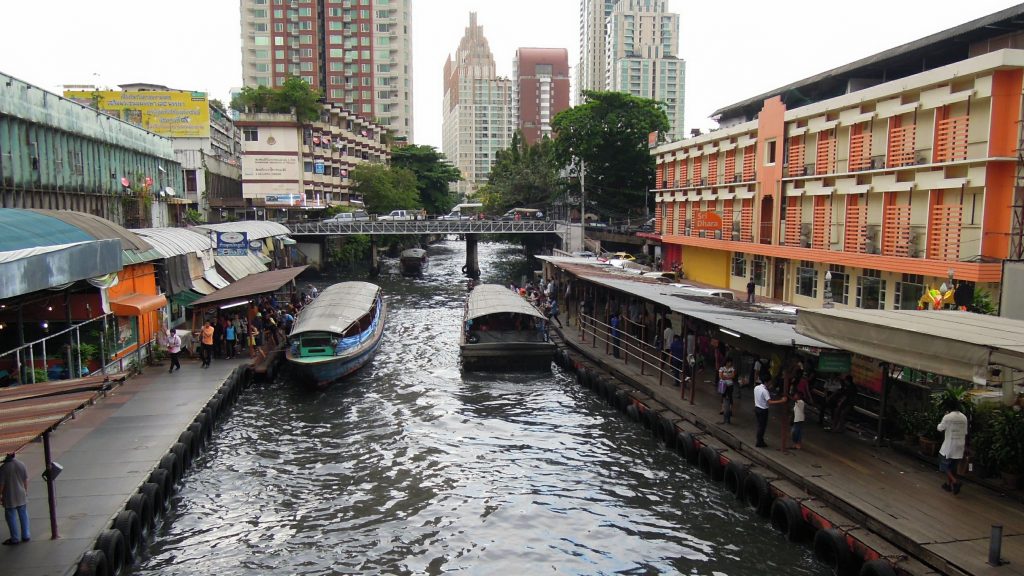 Depending on which section of the canal you are walking, there will be walkways or narrow paths where you won’t find many pedestrians except for the ones living in nearby houses. There may be occasionally debris obstructing your way as in many others Bangkok canals, and from time to time you may smell the reeking stink of its water which are sometimes a mix of sewage water and boats’ gasoline. However these situations are limited only to certain parts of the canal and won’t prevent you from enjoying the atmosphere and get a real glimpse into local Thai communities. 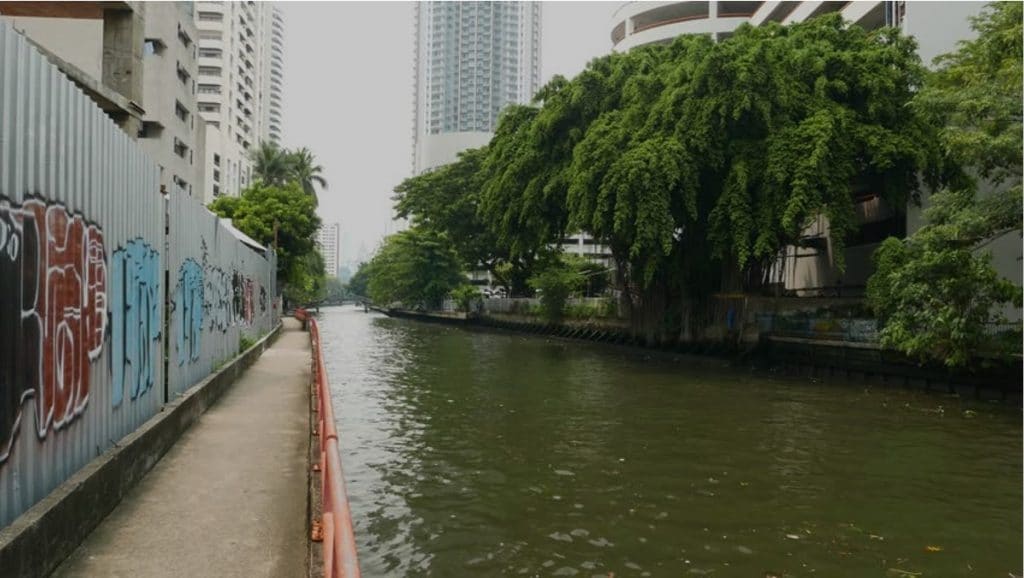 Khlong Saen Saep express boats leaves from Tha Phan Fah next to Khlong Mahanak near Wat Saket (Golden Mountain) and go all the way eastward passing by Siam Square, Phetchaburi Road towards Sukhumvit, and then terminate in Bang Kapi. Each of the express boats operates along the 18 km of navigable areas. There are roughly 100 boats with 40-50 seats capacity. The service carries about 60,000 passengers offering a fast and inexpensive transportation throughout Bangkok’s most traffic-congested districts.

If you decide to hop on one of the express boats, as there are no ticket counters you will have to pay directly to the service staff on board. Ticket collector will find you and then you will have to tell him which pier you would like to get off so he can calculate your fare. If you are not sure about your destination, you may just pay the maximum rate, 20 THB, and decide later on where to get off. Telling the attendant where you are getting off also allows him to help signal you where to get off, but do not rely on the attendant too much, express boats especially during rush-hours tend to be very crowded therefore it is always a good idea to check by yourself.

If you decide to visit the area, keep in mind that Khlong Saen Saep is narrow and busy, long speed boats are designed to pass under bridges, which are very low during the rainy season. There is no central corridor, or benches to sit while you are waiting. Also there are no railings at the piers and boats stop only for a brief moment, no more than 30 seconds, giving just enough time to go up or down the boat without waiting any further, in few seconds the helmsman give gas and the boat is already gone. 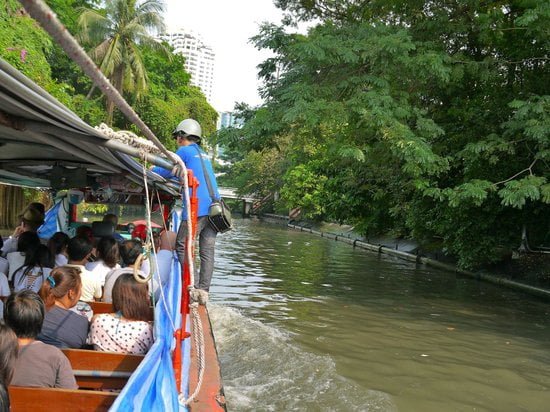 What to see along the Khlong Saen Saeb

Hope you are excited to give a look to these vibrant part of Bangkok canals below we have listed some interesting places to see along Khlong Saen Saeb route. 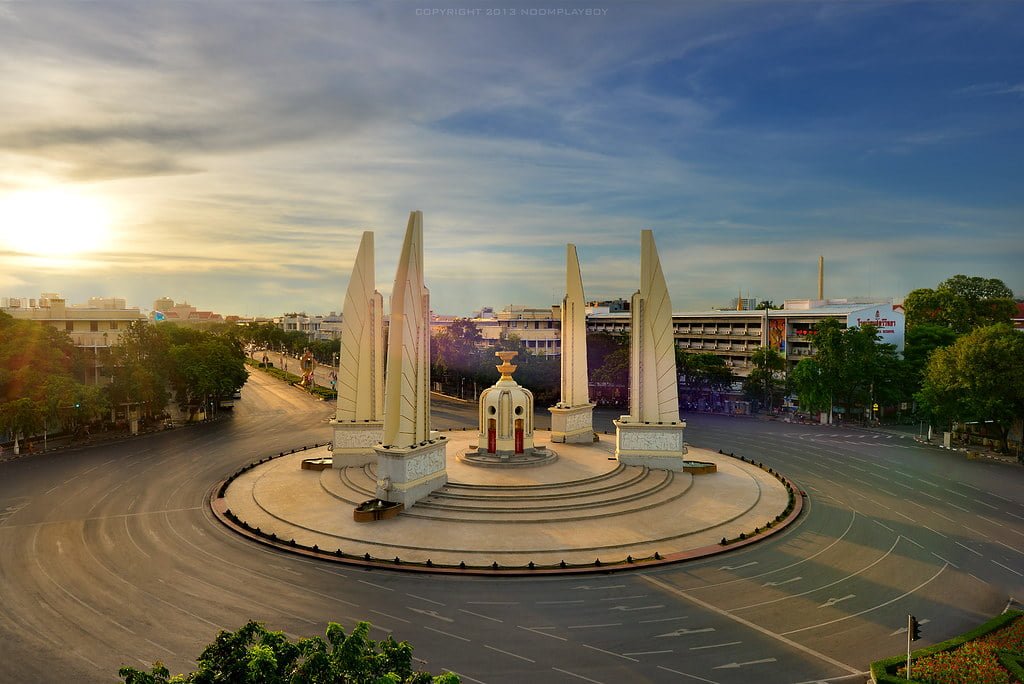 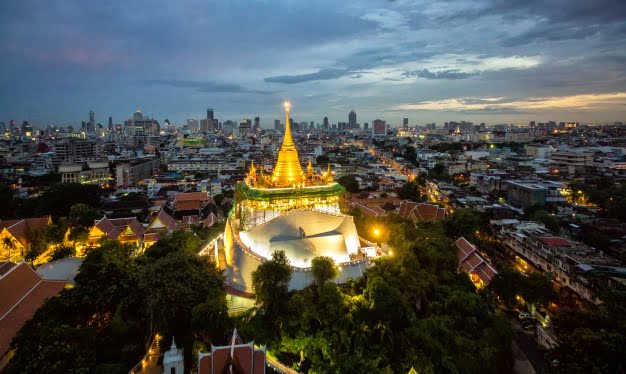 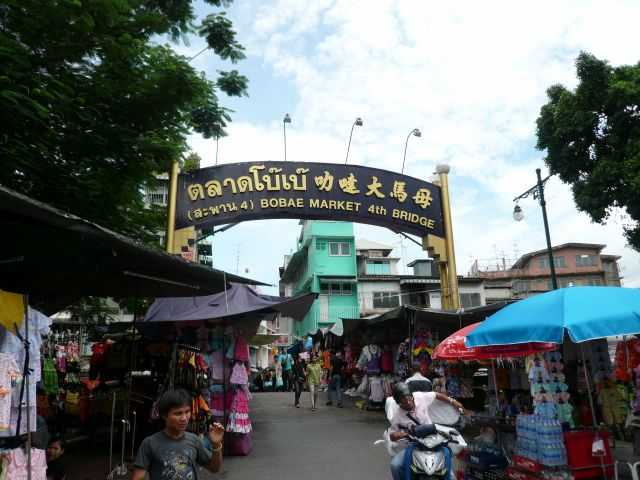 At Bo Bae stop you may stroll around Bo Bae market. It is not a a traditional Thai Floating Market but rather a clothes wholesale trading point and also one of the cheapest market in Bangkok. Stalls line the canal path and there are run-down but interesting houses and alleyways.

At Saphan Hua Chang (BTS National Stadium) You may visit Jim Thompson’s House or walk past the wooden homes on the opposite side. Some houses belong to the weavers who used to provide silk fabrics to Jim Thompson when he was starting out his silk business. 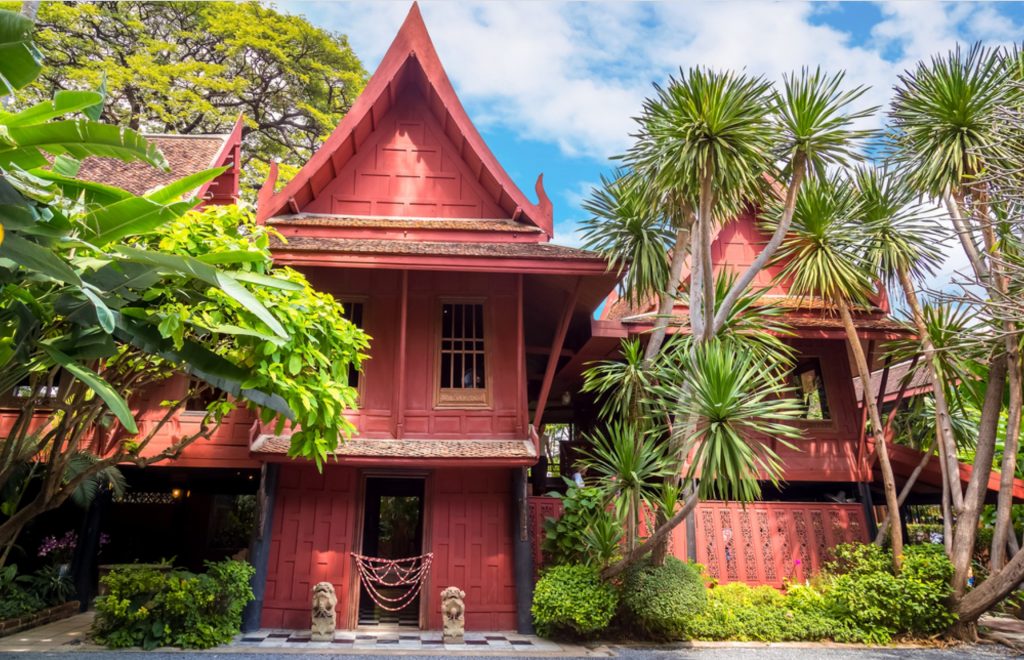 Start your day in Bangkok’s bustling heart. Public boats serve about 18 km of the Khlong Saen Saeb as it cuts through the city center, making it convenient for shopping and sightseeing. Catch a boat during the morning rush hour for a glimpse into Bangkok daily life as smartly dressed commuters hop off and on the regularly-stopping boats as quickly as if they were on a bus. Float on this canal to Siam Square for designer (and knockoff) shopping and visit Jim Thompson House, the magnificent teak home museum of an American silk trader, and other central Bangkok locations such as the Bo Bae wholesale clothing market or the trendy neighborhood of Thonglor packed with boutiques and cafes. Walking pathways parallels the canal allow you to take a stroll along and brings daily delights among the new office buildings, such as bougainvillea pouring down concrete walls or an old teak house.

Boat run from east to west until Wat Saket, a temple topped by a golden stupa in the late 18th century, and it takes about an hour to ride directly from the first stop at Wat Si Bunrueang. Get off early at the Bo Bae stop, where Khlong Saen Saeb and Khlong Phadung Krung Kasem intersect.

The third of the original canals around Rattanakosin is Khlong Phadung Krung Kasem, but no boat services are available here it is not far from th Flower Market Bangkok. It is easily seen on foot as it is 5.5 km in length, with a tree-lined walkway along the river. The canal passes through the main train station in Bangkok, Hualamphong, and it is a perfect place to spend time before boarding a train. 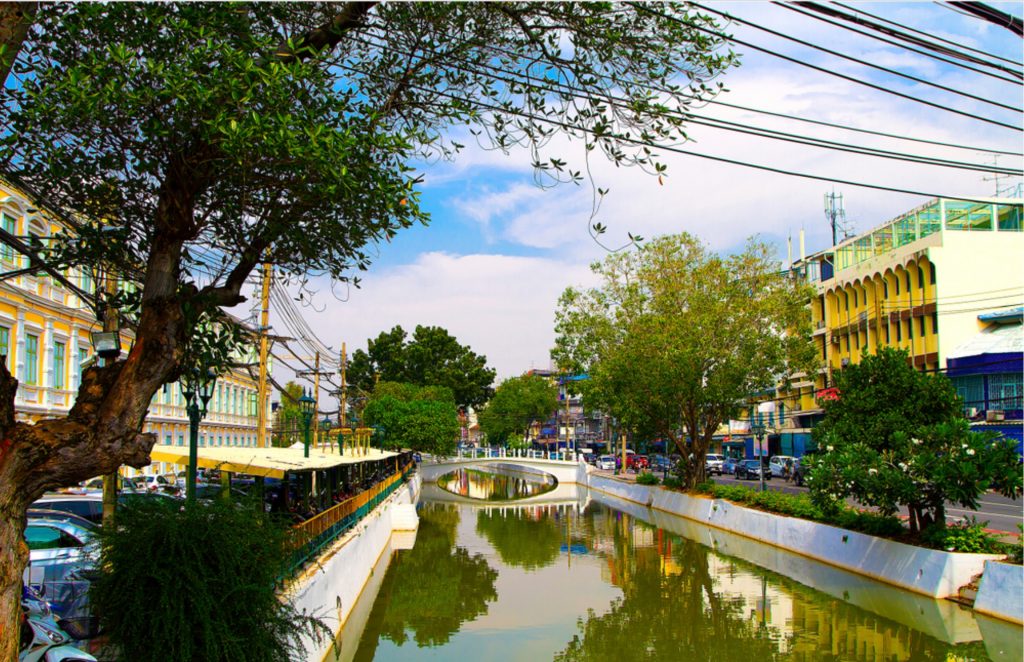 Walk south to Chinatown and Little India for excellent food from Bo Bae market, or north to the plant-and garden-focused Thewet market. Since one of the original canals around Rattanakosin is Khlong Phadung Krung Kasem, it is also a good starting point for exploring the Grand Palace and the historical heart of Bangkok. You can encounter the Chao Phraya River, no matter which way you ride on the canal, where you can catch a ferry to get across to Thonburi on the public riverboats that constantly pass by.

The first place where Bangkok was settled was in Thonburi, on the west bank of the Chao Praya River and directly opposite to the Grand Palace. A small channel was dug in 1542 to shorten one of the meandering horseshoes of the Chao Praya to minimize shipping times, and this channel is now an existing part of the primary course of the river. An island, now home to the photogenic Wat Arun, the Temple of Dawn (which is actually most photogenic at sunset), and the impressive Royal Barges National Museum where teak boats royally ornated, which are used only for ceremonial processions, are on display. 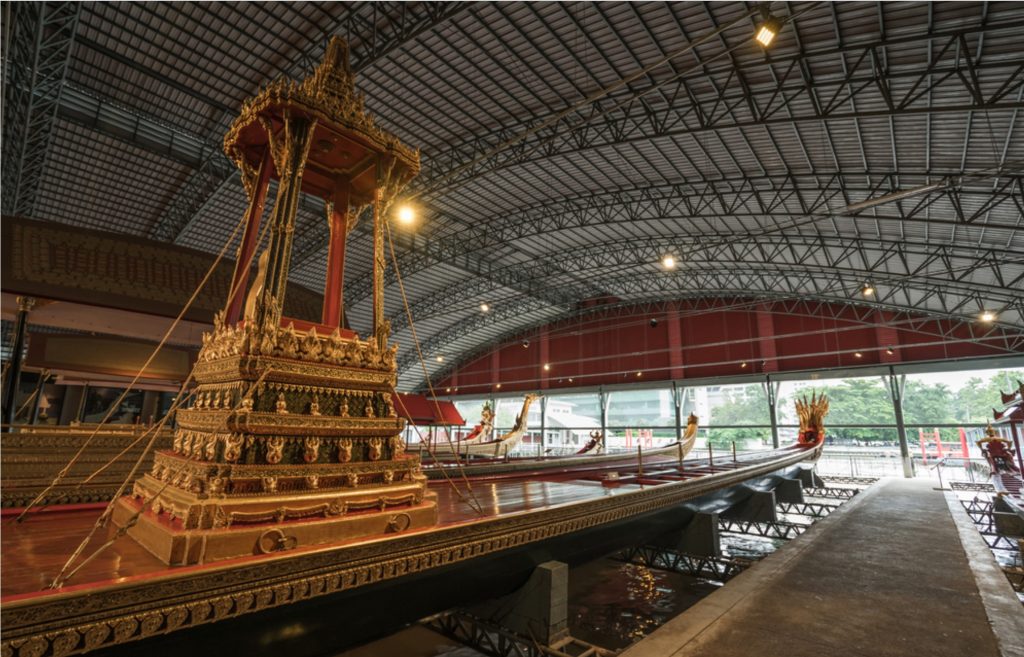 A public transport ride from either end of Khlong Phadung Krung Kasem along the Chao Praya is one way to see Wat Arun and the Thonburi portion that exists on the riverfront. To see the heart of the city, book a canal tour at any of the central piers, including Tha Phra Athit, during which you can zoom past leafy trees, teak houses, and temples along Thonburi’s remaining network of canals. All the tours will take you to Wat Arun and the National Royal Barges Museum, to the floating market of Taling Chan on weekends. This market is also popular in Thonburi for its food vendors who cook fresh seafood in their boats and serve it in floating restaurants to diners. During normal times there are plenty of tourists, but it is an authentic market that is remnant of Bangkok’s early years, when floating markets were normal.