Best Museums in Bangkok to visit with family

Museums in Bangkok are a good way to learn about Bangkok’s fascinating cultural heritage without having to get bored. If you want to learn more make sure to check this article!

Bangkok conveys images of crowded street food stalls, speeding tuk-tuks, and posh rooftop bars. Museums in Bangkok are one thing that is sometimes overlooked, which is a must-see. Give a look at the following best Bangkok museums to get an idea about what to see during your next trip.

Museums in Bangkok – Museum of Siam

Although the Museum of Siam is housed in a large neoclassical mansion, it is not the typical exhibit of historical artifacts and dusty mannequins that one would expect to find in this historic structure.

The first sign of things that appears are large bronze ‘ribbon’ coiling and looping in the front yard. Wooden stairwells, ceramic tiles, and old-fashioned columns contrast with resolutely contemporary art and cutting-edge technology in the reception room. Everywhere you look, the two elements coexist in perfect harmony, as designers take any opportunity to defy your preconceived notions about what a museum should be. 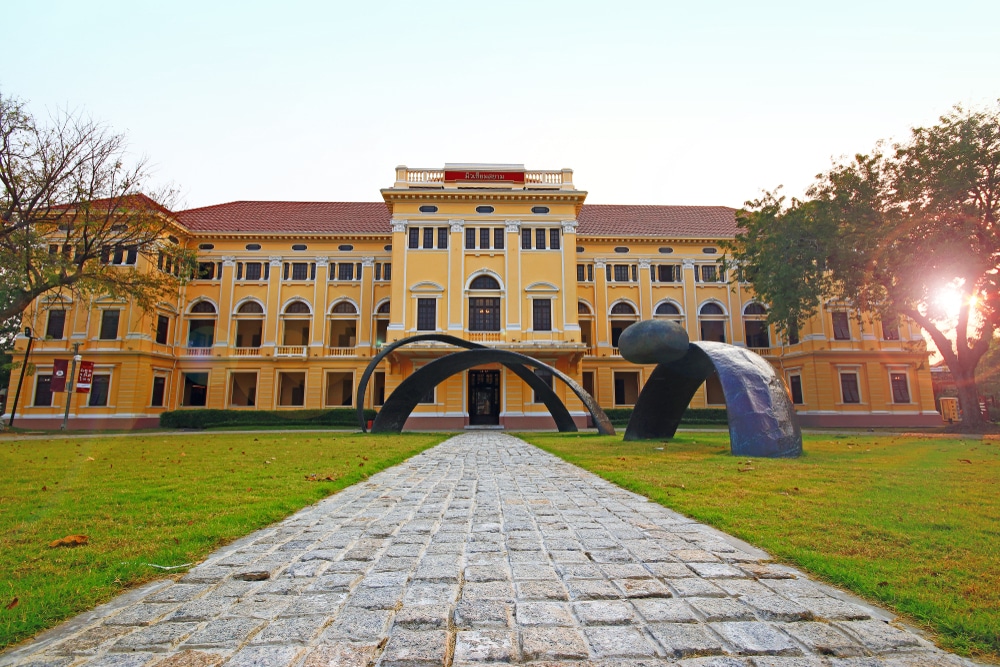 The bronze ribbon seen outside almost penetrates the building in the reception room, curling from wall to wall with the words “What does be Thai mean?” written in red luminous letters all around the place. The museum is entirely dedicated to the concept of “Thainess” the origins of the Thai people, and the evolution of their culture and traditions.

It’s done exceptionally well. The giant ribbon known as The Roong appears to have crossed the wall to become a long panoramic screen on which you will be asked to watch a movie once you reach the first room. This film will immerse you in the Thai spirit through imaginative and often provocative images. It will dispel any remaining concerns about dull museum as it offers beautifully performed masterpieces. After just 10 intense minutes, you’ll be mentally prepared to enjoy the Museum of Siam’s many other surprises.

Highlights from the Siam Museum

From the beginning of Ayutthaya Kingdom to everyday life, Thai culture, battles, Buddhism, and finally the rapid entrance into the modern world, the museum show you all possible Thai things. Every room is exquisitely decorated, and the numerous interactive displays can make time fly by.

If the first section of the Museum of Siam exhibit tends to be a little “classic” things begin to shift as Thailand begins to follow western ideas. The exposition gets even more shocking from there: walk through spirals of TV screens broadcasting the evolution of Thai TV programs over time, then move into a fancy 1960s “Bangkok Café” where you can actually sit or get behind the counter. Teenagers can’t stop themselves from taking pictures of each other in this bright room with a half-parked car in front, although no drinks will be served.

Museum of Siam from the Outside

Don’t leave until you’ve walked over the little shop near the souvenir shop. At first glance, it seems that some entrepreneur has managed to sneak his local shop into the museum, and walking around looking at pickles and fish sauce bottles is a little uncomfortable. The shopkeeper, on the other hand, will solve the mystery for you – it’s all part of the show. All of the regular ingredients made in Thailand yesterday and today, along with how and why they were made, are listed below. And all of a sudden, you may gain a new perspective on fermented beans. As you prepare to leave the “shop” the girl will call you and invite you to enter her refrigerator. You might suggest fleeing or laughing at this point. Come on in! This is the entrance to the next (and final) exhibit, a full-scale European restaurant complete with chandelier and real waitresses. There’s nothing to eat here; instead, take in the wax displays of a variety of Thai dishes and have a good time snapping images.

The Museum of Siam is an unexpected exhibit, and even if museums aren’t normally on your vacation itinerary, it’s a perfect way to learn about Thailand’s spirit and culture without being dull. It’s also a good addition to a day trip to this part of Bangkok because it’s close to Wat Pho and near Flower Market Bangkok. 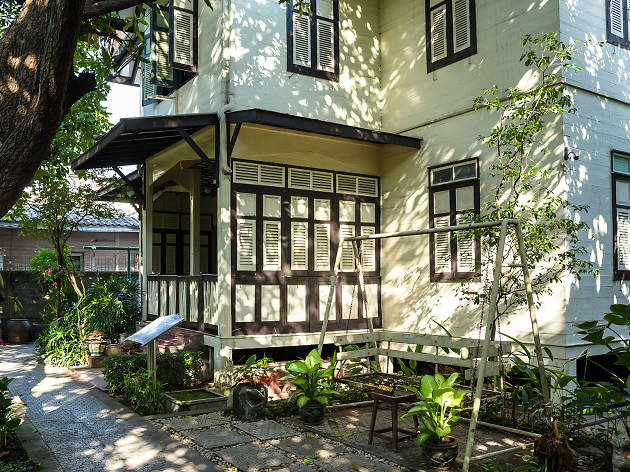 This is a slightly off-the-beaten-path museum, it could be an hidden gem comprised of many intimate, charming homes built in the 1930s. The complex has been meticulously preserved and maintained, providing tourists with a glimpse into life in the Thai middle-class nearly a century ago. A smaller, more modern structure houses old images of Bangkok, as well as an eclectic collection of artifacts and items. It’s not unusual to be the only one in the room.

This is a museum dedicated to counterfeit goods housed on the 26th floor of the Supalai Grand Tower, it shares a floor with its founders, Tilleke & Gibbins, a working law firm. It’s tucked away and not in the heart of the city, therefore you won’t easily find it by accident. The exhibition features 500 counterfeit pieces, ranging from clothing to food to drugs, that were seized from the firm’s thousands. It’s great to see, but there’s a bigger reason behind it: It was set up to raise awareness about copyright infringement among the general public. It could be a nice stop if you are in the area. 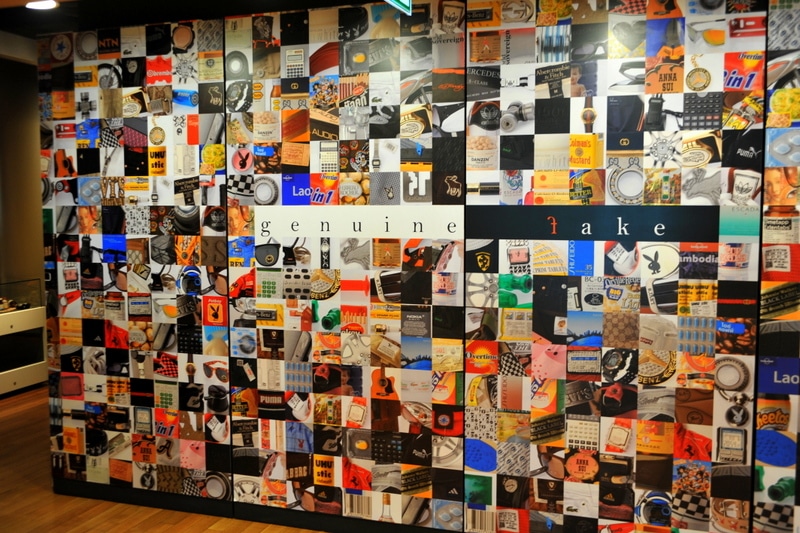 Thailand’s largest collection of local art and artefacts is on display at the Bangkok National Museum. The museum, which was established by King Rama V, is housed in the former 18th-century Wang Na Palace in Phra Nakhon. Wat Phra Kaew and The Grand Palace are both within walking distance, so you can easily combine a day trip to both while in Bangkok. 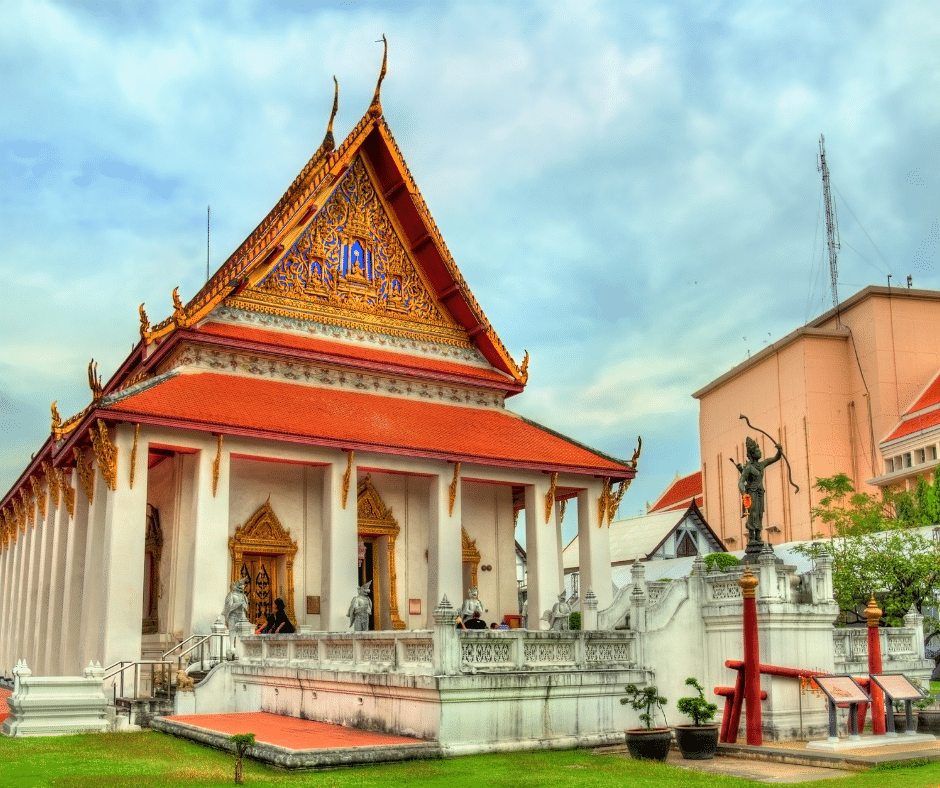 Highlights from the Bangkok National Museum

Bangkok National Museum’s exhibits are divided into 12 halls, each with interactive displays in English. Relics from King Rama IV’s reign, which spanned through the Sukothai and Rattanakosin eras, can be seen.

From the Sukhothai and Ayutthaya periods to the new Thai Kingdom, the Archaeological and Art History collection displays artifacts from Thailand’s prehistory. Chinese arms, precious stones, Khon masks, ceramics, textiles, and traditional Southeast Asian musical instruments are among the highlights of the Decorative Arts and Ethnological collection. The Bangkok National Museum has a funeral chariot hall with carriages used for royal cremations on display, as well as many outstanding examples of Thai architecture. On different days of the week, free tours in English, German, French, and Japanese are offered.

The heritage home and museum is one of Thailand’s most interesting spot to visit and Baan Kukrit, is seldom visited by tourists in Bangkok. This tranquil spot is not only an amazing green oasis, but it’s also an architectural gem, an educational museum, and a great place to spend an afternoon. Kukrit (an artist, newspaper owner, journalist, and prime minister, among other things!) constructed his heritage home in Bangkok from five traditional Thai houses that were totally demolished, transported, and reassembled on the current site. Classic Thai architecture is featured in the homes, which have an open ground floor, lush Khmer style gardens, a lotus pond, and sculptured miniature mai dat trees that are similar to Japanese bonsai. The Kukrit House is a must-see for those interested in seeing the stunning home of one of Thailand’s most amazing persons 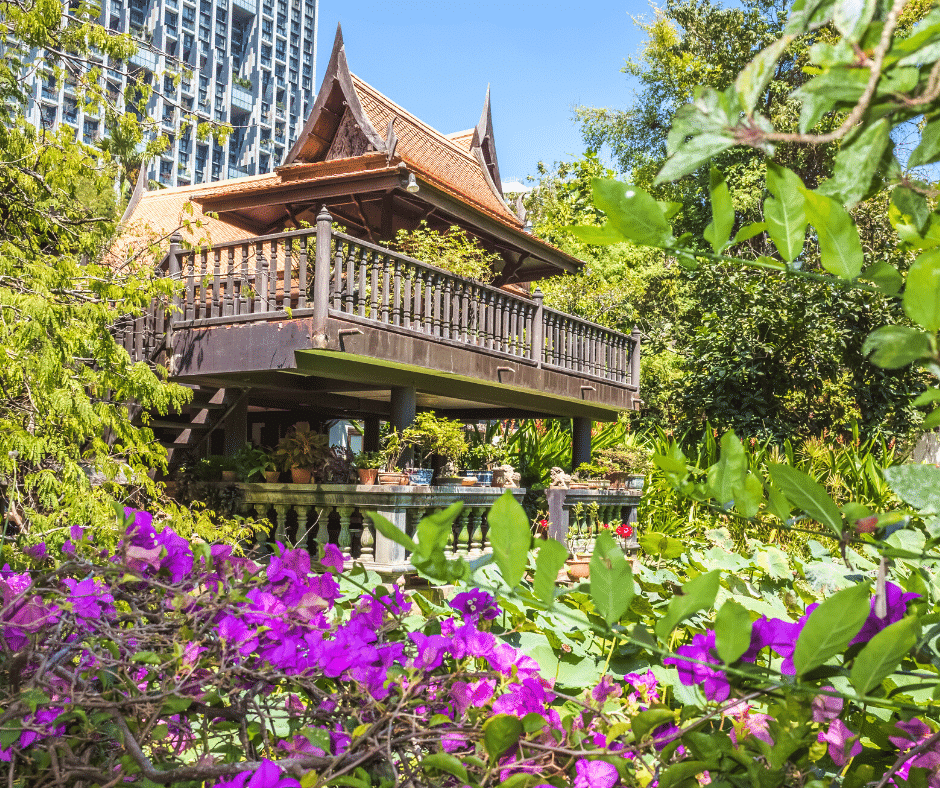 Taking the BTS to Chong Nonsi and walking south on Narathiwas Road, crossing Sathorn, and then turning left onto Narathiwas Soi 7, which leads to Prapinit, is the best way to get to the Kukrit Home. It is also very near Suan Phlu a modern and vibrant area near Bangkok’s business districy

This is a unique museum, Michael Messner, an Australian who owns two restaurants in the well-known area, is the brain behind the Patpong Museum. Messner married a Thai woman in 2001 and moved to Bangkok. Locals who have come to dine at his restaurants have taught him a lot about Patpong since then. Messner, the son of an artist and an accomplished curator of Thai and foreign art, was so taken aback by Patpong’s past that he made it his mission to create a home for these priceless decades-old memories. 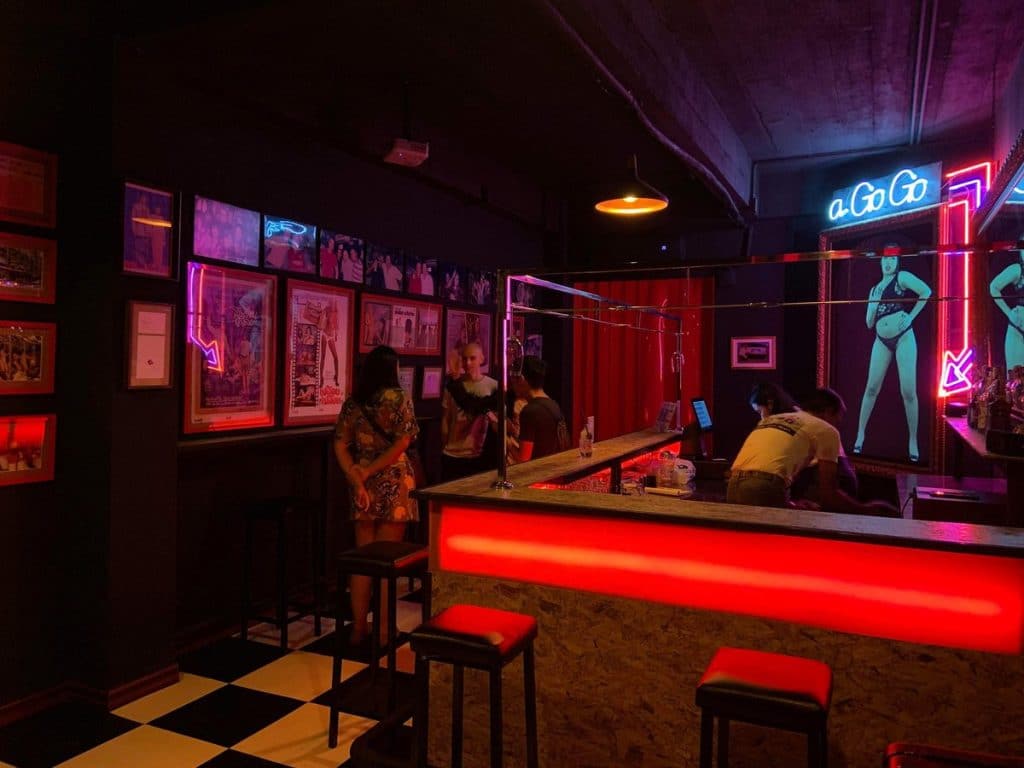 The museum is on the second floor of Black Pagoda, when visitors first enter the museum, they are transported back to a time when Patpong was a sprawling banana plantation. Photographs and details about Luang Patpongpanich—formerly Tun Poon, a Chinese immigrant from Hainan who purchased the land and established a banana plantation —as well as a model of Patpong in the 1940s are on display.

The second room contains the tale of Patpong’s turning point. Luang’s uncle, Udom Patpongpanich, brought in investors from the United States, resulting in the area’s Westernization. Objects and collectibles from international companies like IBM, Shell, and Caltex, as well as airlines like Pan Am and Qantas, are on display in this space. A 13-minute film about the Vietnam War is also being shown in a small theatre.

Patpong became more well-known among visitors and celebrities from all over the world after the arrival of American companies and investors. As a result, pubs, nightclubs, and restaurants have sprouted up along the city’s streets.

In the next room, a detailed miniature model of Patpong in its current state provides a glimpse of the city. Visitors can take a stroll around Patpong and get a closer look at some of the city’s most famous attractions. The Wall of Fame, an interactive screen that enables visitors to use a tablet to browse through photographs of celebrities who have visited Patpong, is another highlight. Only a few examples include David Bowie, Kylie Jenner, and Hugh Grant.

The museum admission fee is B250, which includes a guided tour, one free drink, and headphones with multilingual narrations. The first three rooms are restricted to visitors under the age of 18. 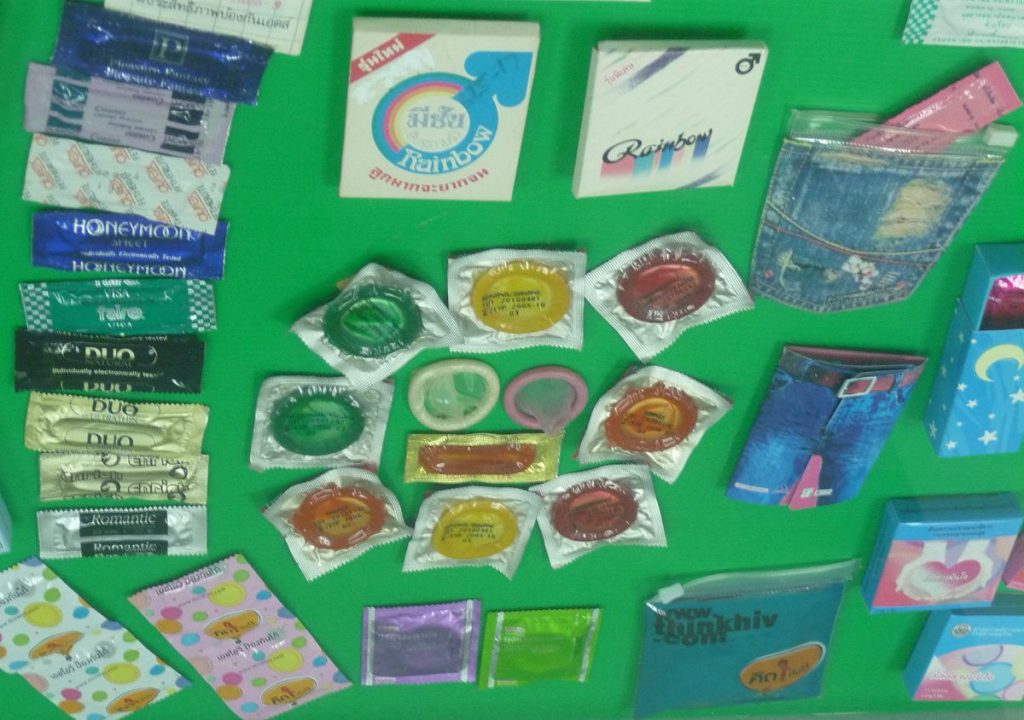 This amusing museum is housed on the grounds of the Ministry of Public Health, allows interested tourists to check a large selection of different rubber prophylactics for free. Condoms of various labels, sizes, colors, and flavors are shown in clear glass cabinets. The first condom manufactured in the world, as well as female condoms, are on display. The real fun, however, begins behind the museum in the quality and endurance testing room. See how far a condom can stretch through an automated inflation device computer for cheap thrills.