Wondering what are the main features and the origins of one of the most scenic traditional Thai Festival? In this article you will find the answers! Find out more on Loy Krathong!

Loy Krathong is traditional Thai festival. The word “Loy” means to float and “Krathong” is a banana leaf cup made of natural materials such as a banana trunk, banana leaves and lotus petals. It is decorated with a candle, incense sticks, flowers and coins to ensure an auspicious life. People will flock to rivers or any water streams and then make a wish before drifting their Krathong onto the river. The floating of Krathong is intended to banish all sufferings and ask for apologies to the Goddess of the River for contaminating her waters. Some believe that the ritual is meant to worship the Buddha’s footprint on the bank of the Narmada River whilst others say that it is to pay respect to Phra Uppakhut, one of the Lord Buddha’s great disciples. 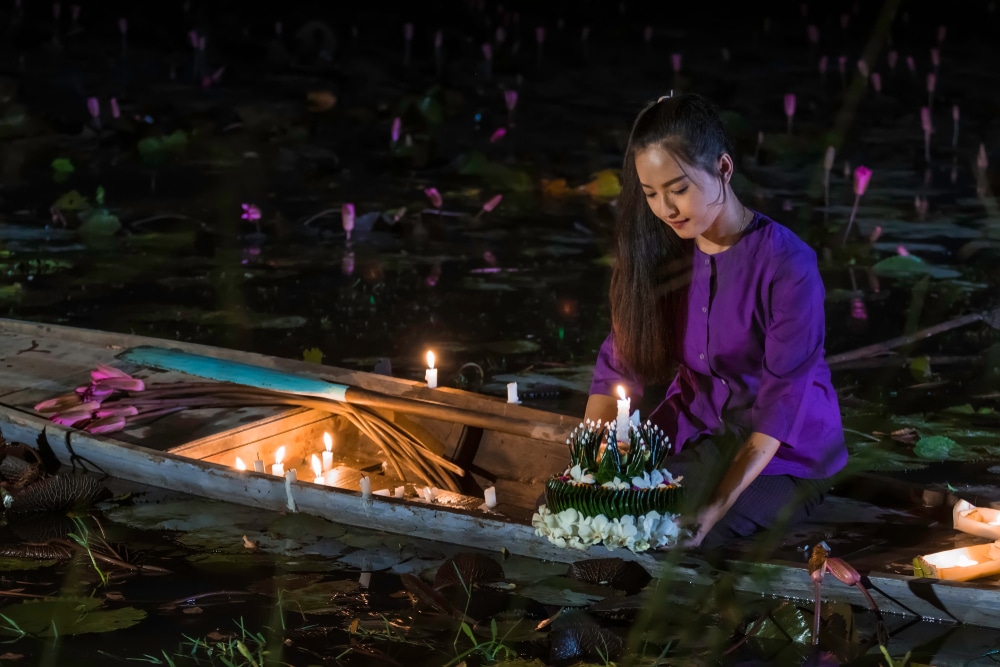 The illuminated night of Loy Krathong comes with various entertaining activities. Thai people of all ages and from all walks of life can marvel at plenty of delightful activities after gliding their Krathong away. There are folk entertainments, light and sound presentations, dance parades, local product fairs as well as many other genres of traditional and cultural performances. The highlight of the festival will be the most beautiful Krathong contest and beauty pageant set in memory of “Nang Noppamas”, a legendary woman lived during the Sukhothai period. Significantly, fireworks are performed in the same spirit as when lighting candles in an act of worship and to pay homage. Firework displays have become a quintessential element of this vibrant festival. 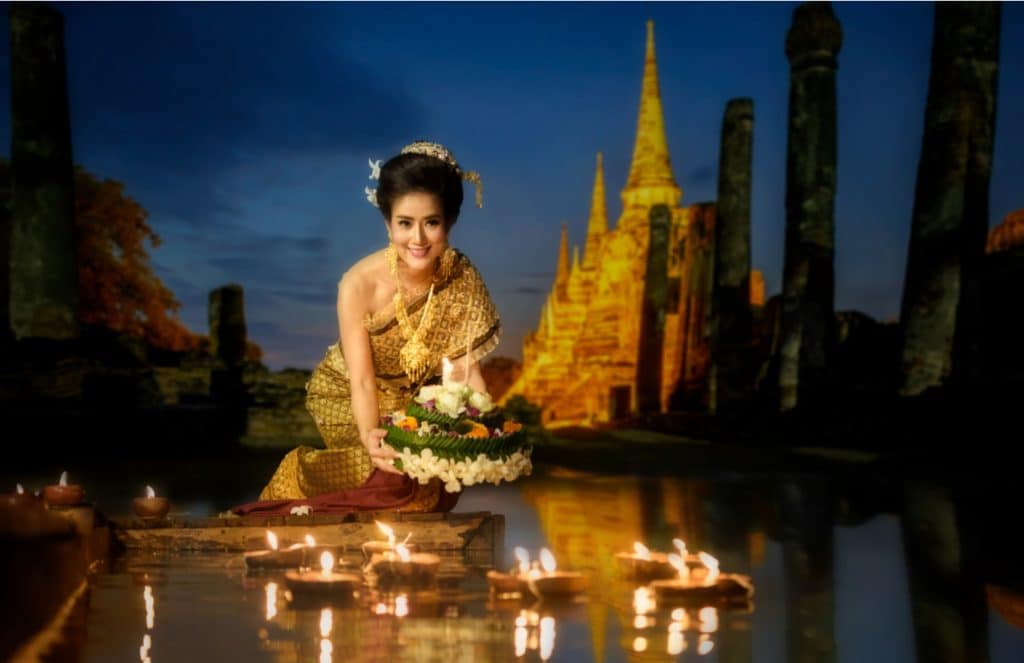 The exact origin of Loy Krathong is supposed to begin more than 700 years ago during Sukhothai era, the ancient capital of Thailand, when farmers held a lantern floating festival shortly after sowing seeds in their drenched paddy fields. One talented woman named Nang Noppamas or Thao Si Chulalak who resided in the palace of King Phra Ruang marvelously created special lanterns for this festival. Unlike other conventional lanterns, they were made of banana leaves devised in the shape of lotus petals. The lanterns astounded the king that he commanded once a year on the full moon night a grand ceremony should be celebrated by releasing into waters lotus shaped banana leaf cups. This practice has been thoroughly upheld up to modern days.

This year Loy Krathong is commemorated nationwide on the 31st of October in different manners especially in Bangkok, Sukhothai, Ayudhya and Chiang Mai. Sukhothai, the site of origin of the festival, celebrates Loy Krathong with a Candle Festival. Some more fascinating activities comprise firework displays, cultural performances and a procession of offerings carried out by locals to pay homage to the statue of King Ramkhamhaeng the Great.

Another well-known place to celebrate Loy Krathong is Chiang Mai. The festival is called “Yee Peng” where the largest Krathong march along the city on a fully decorated truck. At night the colorfully lit Krathong form a luminous parade as they make their way to the river. People also celebrate the festival with thousands of candlelit “Khom Loy” or floating lanterns consisting of “Khom Fai” – fire lanterns – and “Khom Khwan” – a smoke lantern that are released into the night sky, based on the belief they are to pay respect to the Buddha’s holy relics and Phra Chula Manee in the heaven. These balloon-like lanterns are believed to send away calamities. Ideal venues to visit are the Tha Phae Gate and the banks of the Ping River. 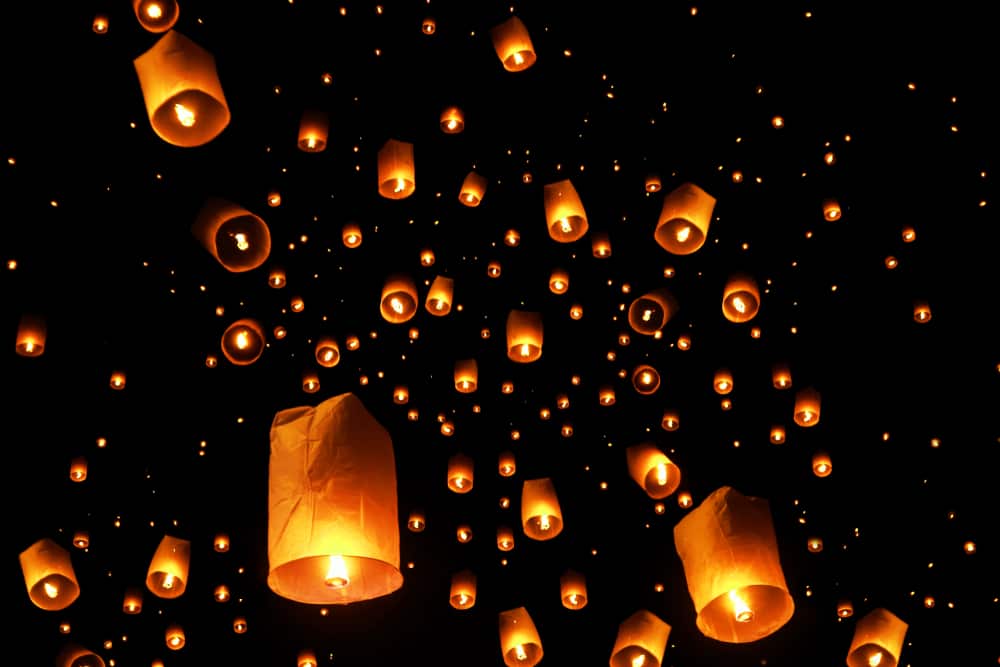 When the lit Krathong are released into the waters, they typically wander along and make a breath taking and twinkling curving line or “Sai” in Thai, amidst the darkness of the night. In “the City of Angels” (Bangkok), the banks of the glorious Chao Phraya River are the prime location to celebrate the festival. So as to revive an old custom of the ancient capital, Loy Krathong is arranged to preserve the royal ritual of the early Rattanakosin period in which several types of traditional Krathong were set afloat onto the Chao Phraya River and its waterways. Many riverside hotels and restaurants also hold special celebrations for their guests. For a more stunning night of Loy Krathong in Bangkok, visitors may have a look at and join the crowds along the Chao Phraya River, the Rattanakosin Island, the Santichaiprakarn Park, the Rama VIII Bridge, the Taksin Bridge and the Krungthon Bridge.

Thai people from all walks of life are gathering on the nearest river with their hands holding a fine-looking banana leaf cup. The rivers and waterways are illuminated with glittering lights whilst the historical remains and commercial buildings along the banks of the majestic Chao Phraya River are adorned with electric decorations. The joyful festivities like firework displays, traditional performances as well as light and sound presentations are just around the corner.

These are the common scenes awaiting you on the colorful night of Loy Krathong.