Talad Noi, meaning small market, is sure to capture the hearts of all who visit less-frequented areas of Bangkok. Despite its seemingly deceitful name, Talad Noi is actually a riverside community filled with unique finds around every corner. Find out more about this fascinating neighborhood in this article!

One of the oldest neighborhoods in Bangkok, Talad Noi is packed with historic temples, beautiful shopping houses, elegant colonial mansions and small, winding laneways full of street art and pieces of second-hand vehicles. The area is the joy of a street photographer and it is located only a few minutes’ walk from the crowded Chinatown (Yaowarat). As a peaceful, riverside Chinese community it is less frequented by tourists, where each alleyway yields its own unique surprise. If you love to venture off the beaten path, add this lesser-known neighborhood to your Bangkok travel plans. Here’s what you need to know about this ancient and often forgotten neighborhood of Bangkok.

Bangkok’s Chinatown is well known to tourists, with famous attractions such as Wat Traimit, Sampaeng Market, fabric stalls, gold shops and of course, all that delicious street food. Yaowarat Road is what you would consider a shopper’s delight. Yaowarat Road is a place of frenetic energy not to be missed, full of market stalls, street-side eateries and illuminated with neon nightlights. 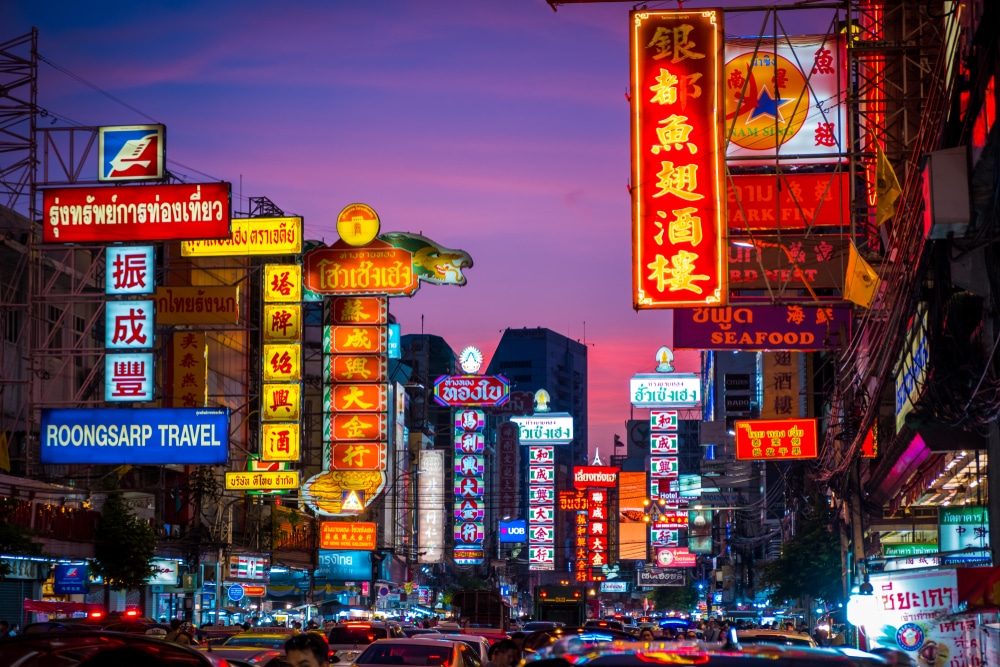 But on the other hand of Bangkok’s Chinatown, lies Talad Noi a much lesser-known suburb, concealed to the masses of tourists yet very trendy and fascinating. Head south-east of Yaowarat Road for a few minutes and you’ll discover another side of Bangkok Chinatown that few tourists ever see. One that is off-the-beaten track and not congested with traffic, unlike its more famous neighbor, which means it’s great for exploring on foot. 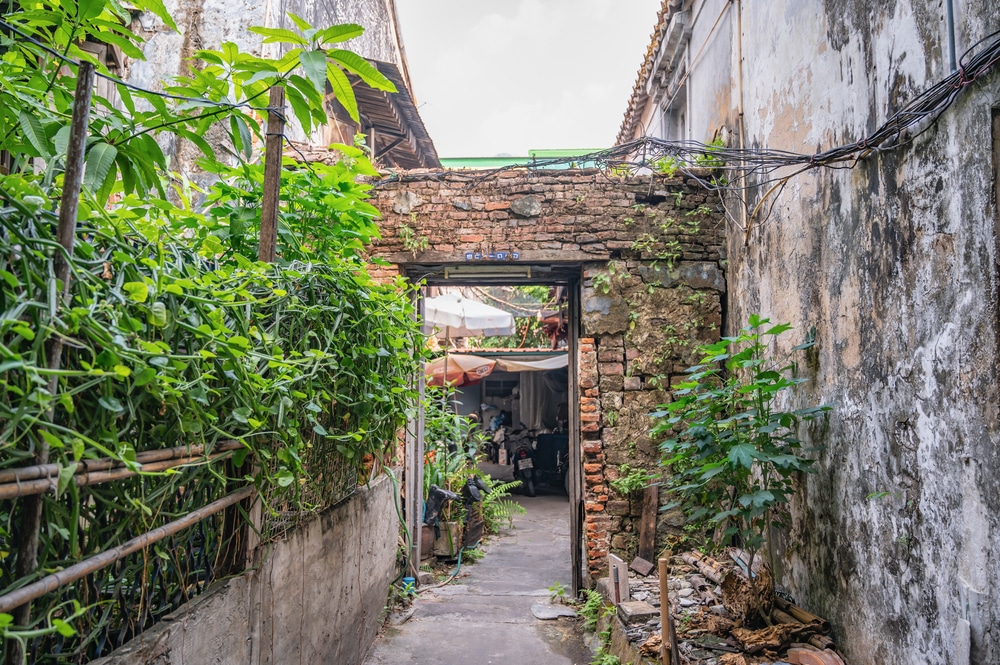 Talad Noi, means “small market”, and it is an old Chinese village. The neighborhood of Talat Noi runs parallel to the eastern bank of the Chao Phraya River and is home to many ancient buildings and temples, charming Chinese-Thai shop-houses and old-time alleyways dotted with street art. However perhaps its most noticeable characteristic is the stacks of used car parts in the community outside the mom-and-pop workshops known as Siang Kong.

A visit to Talad Noi will certainly captivate those who visit this lesser-known area of Bangkok. Here we will describe some of the most beautiful attractions that must not be missed.

In the Chinatown neighborhood, Wat Traimit, or Wat Traimit Witthayaram, is a Buddhist temple.The Temple is renowned for housing a Buddha image sculpted in the elegant Sukhothai style, the Golden Buddha (officially titled Phra Phuttha Maha Suwana Patimakon). The 3 meter (9.8 foot) tall seated Buddha statue, made of solid gold, weights 5.5 tonnes (5,5000 kilograms) and is said to be the largest solid gold Buddha image in the world. If this isn’t amazing enough, even more incredible is the tale of its discovery.

The statue, believed to be over 700 years old, emerged in Sukhothai and was covered with layers of plaster at some point to conceal its true meaning. Transferred to Bangkok, the statue remained in obscurity for over 200 years in a small shrine. No-one actually wanted the statue and it was decided to move it to Wat Traimit in 1955.

An ancient royal monastery founded during the Ayutthaya period that’s what is Wat Pathum Khongkha Ratchaworawihan (or Wat Pathum Kongkha for short). It sits parallel to the Chao Phraya River and adjacent to Sarn Chao Sieng Kong, an area known for its spare parts, located on Soi Songwat (Song Wat Road). Its close proximity to the Chao Phraya River meant that Wat Pathum Kongka was an important temple used for Royal cremation ceremonies, and when they were ready to pass away, the famous white elephants of Siam would also be brought here.

Due to its position within the Sampheng district, the temple is often confusingly named Wat Sampheng. Wat Pathumkongkha is listed as an Ayutthaya period second-class temple with its key characteristics of large white stupas (which are only sparkling when the sun shines) and its surrounding cloister walls packed with images of golden Buddha. 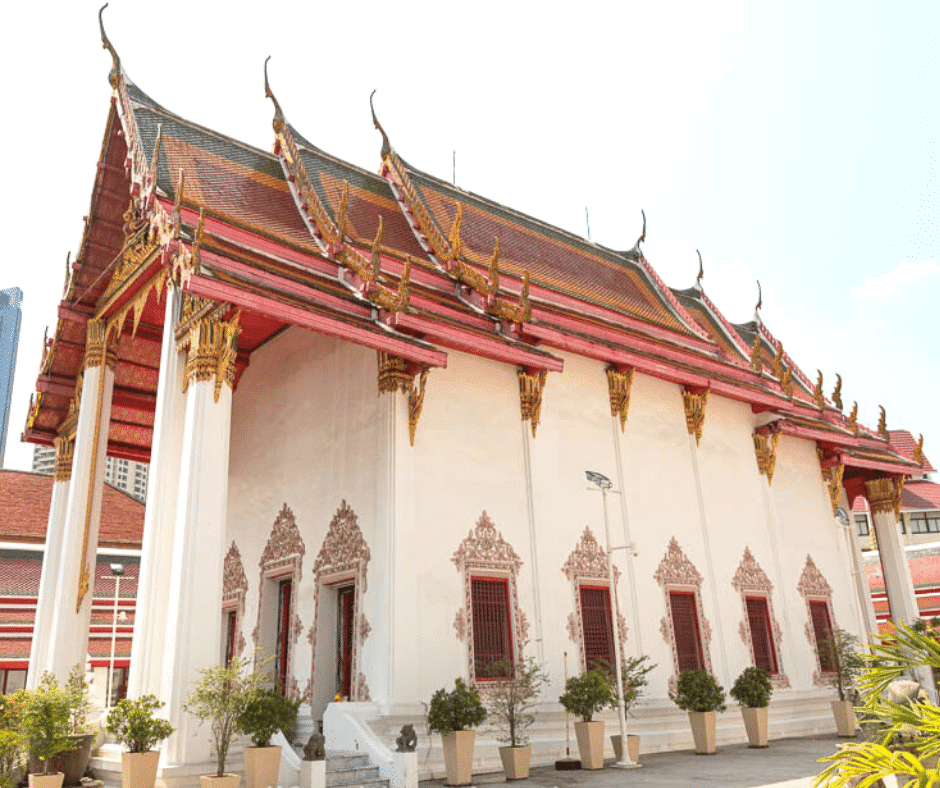 A rarity in Bangkok is the 230-year-old Sol Heng Tai Mansion, a real hidden treasure only waiting to be discovered. Move to enter a courtyard through the ornate entrance doors that will leave you absolutely dumbfounded. There is an original ancient Chinese mansion here in the heart of Talad Noi, just a stone’s throw away from the Chao Phraya River, which also doubles as a scuba diving center.

The So Heng Tai Mansion, which operates out of one of the oldest Chinese courtyard complexes in Bangkok, runs a diving school along with a small café on site. Enjoy a drink overlooking the diving pool and central courtyard from the second floor of the building. The house is a magnificent living museum with its gently curving roofs, bright red accents, ancestral portraits and vibrant porcelain accents adorning the walls. 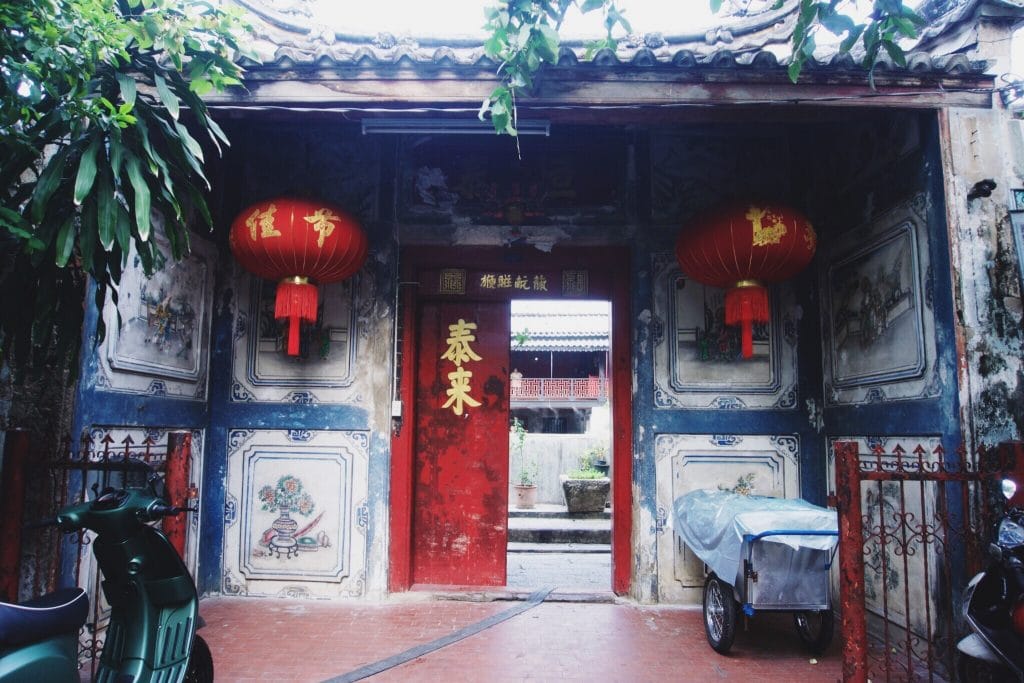