On the twelfth lunar moon of the Thai calendar, there is a very special Thai festival, known as Loy Krathong. Learn more on this fascinating Thai tradition

As the raining season is getting to an end, we are approaching a very special Thai festival. The night of Loy Khratong, which this year is going to be celebrated on November 11, is one of the most picturesque and also romantic evening that you may experience in Thailand. The ceremony starts after people have gathered around, rivers, lakes or canals with the purpose to pay respects to the goddess of water by releasing beautiful lotus-shaped rafts, decorated with candles, incense and flowers onto the water. Every year this magical event takes place on the 12th month of the lunar calendar, usually in November, the sight of the flickering candles that disappear into the night is indeed a beautiful sight and there are plenty of places and opportunities in Bangkok to take part into this ancient tradition. 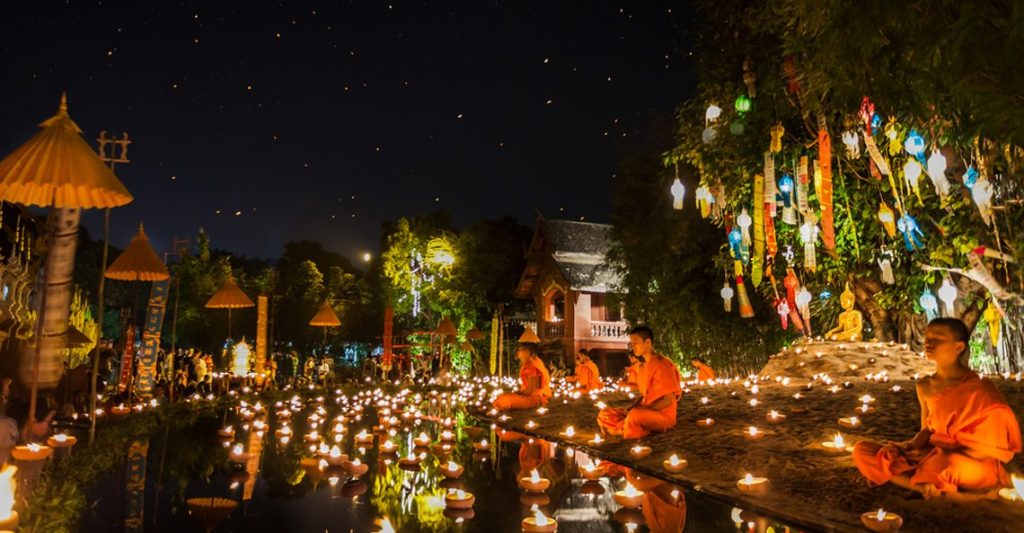 However, what are the reasons behind this celebration? There are several versions; some say that after the harvest season is ended, it’s time to thank the God of Water for the abundant supply of water which helped a plentiful harvest. Couples believe in the legend that says if a couple releases their krathong together, they will meet and fall in love again in the next life. With tantalizing fireworks, candles, and the full moon, Loy Krathong could be compared to Valentine’s Day – but with banana tree leaves and joss sticks instead of roses. For others instead it is the time to finally let ‘float away’ all the anger and grudges you have been holding onto, and including a fingernail or a lock of hair is seen as a way of letting go all the bad thoughts you may have been holding, to start a new year free of negative feelings.

According to the traditions Krathongs, which are loosely translated as “vessels or boats” in the past were made from natural materials, generally taken from a banana tree trunk, crafted into a lotus shape by using folded banana leaves. This version can still be found in more traditional celebration places. More recently, Thais have become more creative in their craft and design the krathongs from coconut shells, flowers, baked bread, potato slices, some breaking with the conventional lotus leaf shape in favor of turtles, other sea creatures or even cartoons.

What if you wanted to get involved first hand into the celebration? What are the best spot to participate in this wonderful Thai festival?

Asiatique is more mainstream and that’s where you will find big crowds and also beautiful shows. Traffic in the area during this Thai festival is generally very hectic and there’ll be long queues to take the shuttle boat in front of Saphan Taksin BTS Station.

If you want to go to a more local destination where to enjoy this tradition we recommend you taking a stroll along the Chao Phraya River especially visit some of the Temples along the river. Our favorites are Wat Yannawa, walking distance from BTS Saphan Taksin, there is a big market and the atmosphere is like a big traditional Tempe fair. Another Temple is the Wat Prayurawongsawat, on the Thonburi side of the city; it received the UNESCO Cultural Heritage Conservation Award of Excellence in 2013.

If you are in the middle of Bangkok Business District you may also enjoy the atmosphere at Lumphini Park which is packed with tourists and locals alike.

If you would like us to recommend a typical itinerary or would like to have an expert local guide taking you around feel free to drop us an email! We strive to propose unusual tours which take you out of the most touristy destinations and we want you to experience the real essence of Thailand.