There are many beautiful Buddhist temples in Bangkok. One of the best-kept secrets is Wat Ratchapradit, built during King Rama IV's reign.

There are many beautiful Buddhist temples in Bangkok. One of the best-kept secrets near the Royal Palace is a compact temple built during King Rama IV’s early reign.

Located in the Phra Nakhon district, you will find the small but elegant Wat Ratchapradit Sathit Mahasimaram Ratcha Wora Maha Viharn. It’s a small, quiet, peaceful temple near the magnificent Grand Palace. Tourists do not know about the existence of this temple, but it is a must-visit for those interested in temple architecture. 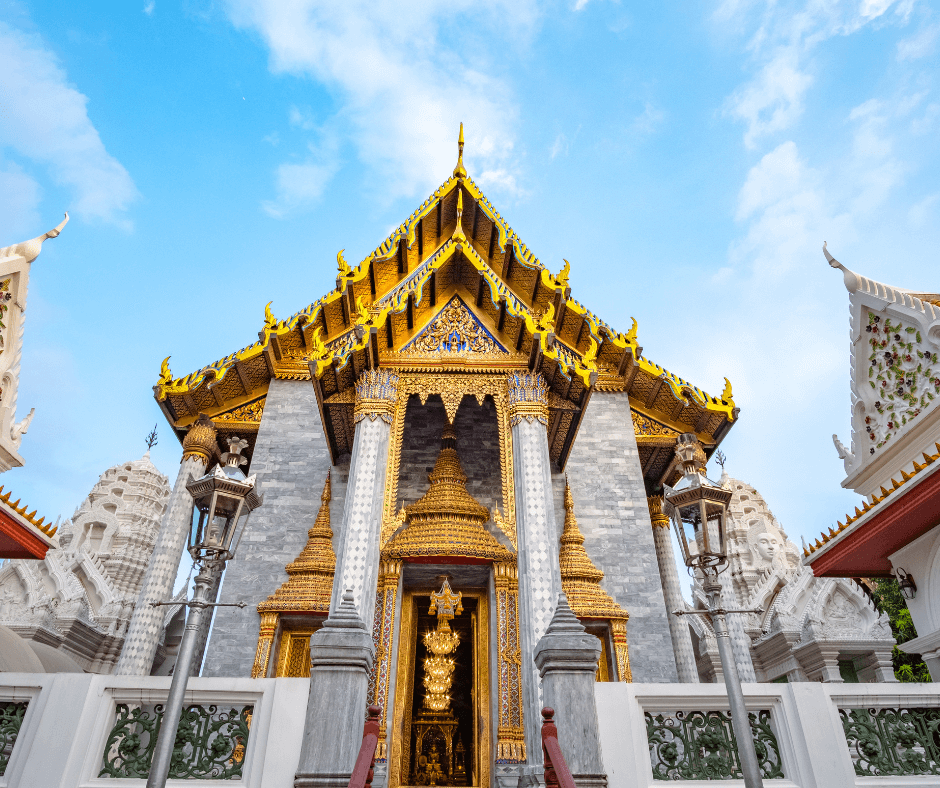 King Nangklao initially designated this land as a coffee plantation, but after his death, King Mongkut changed his mind and decided to build a temple. Construction of the temple began in 1864 and was completed seven months later. It is one of the earliest temples belonging to the reformist Dhammayutika sect. The main distinguishing feature between them and other sects is that they wear brown robes instead of traditional orange ones. As the temple’s first abbot, Sa Pussadeva was appointed by the king from Wat Bowonniwet Vihara. He made Wat Rachapradit the sect’s first temple. The Wat Ratchapradit temple in Bangkok was designated a first-class royal monastery in 1915, making it one of Thailand’s most significant Buddhist temples.

The temple’s accommodation area is located outside the building, facing the street. Although it is quiet, it faces busy traffic.

The main structure, Phra Viharn Luang, sits on a raised platform and its exterior is covered with grey marble tiles. On either side of Phra Viharn Luang stands a pair of nearly identical white shrines, each topped with a spire-like structure. These are known as prasat and represent sacred buildings. 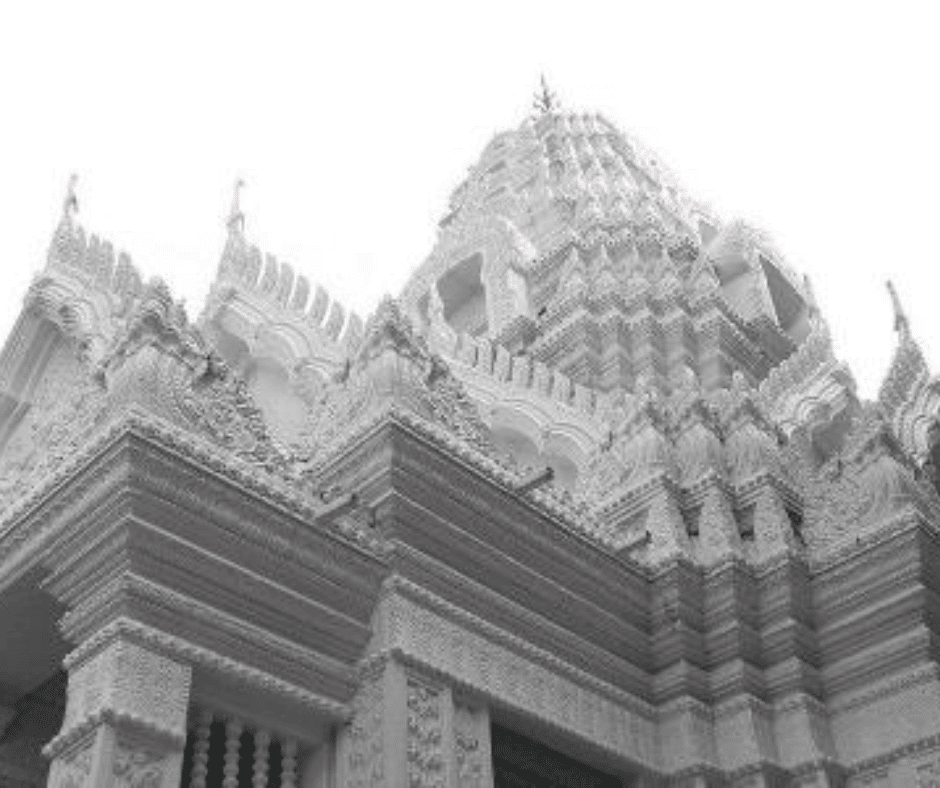 The eastern shrine is the Ho Trai, or the library of sacred texts featuring scenes of the Buddha’s birth and his passing into nirvana. To the west is the Ho Phra Chom, decorated with the faces of Brahma on four sides. The pediment on the building depicts a golden royal crown on a blue glass background, which was the emblem of King Mongkut. Two windows on either side are framed in gilded teak, and above them is a traditional crown-shaped pediment.

The layout and décor are well designed. The temple has several beautiful murals depicting different royal ceremonies. The Temple’s design is elegant, with few complex symbols and details. It is decorated with beautiful mosaics in green and blue tones and carvings. Inside the temple, you will also see a life-sized statue of King Mongkut. 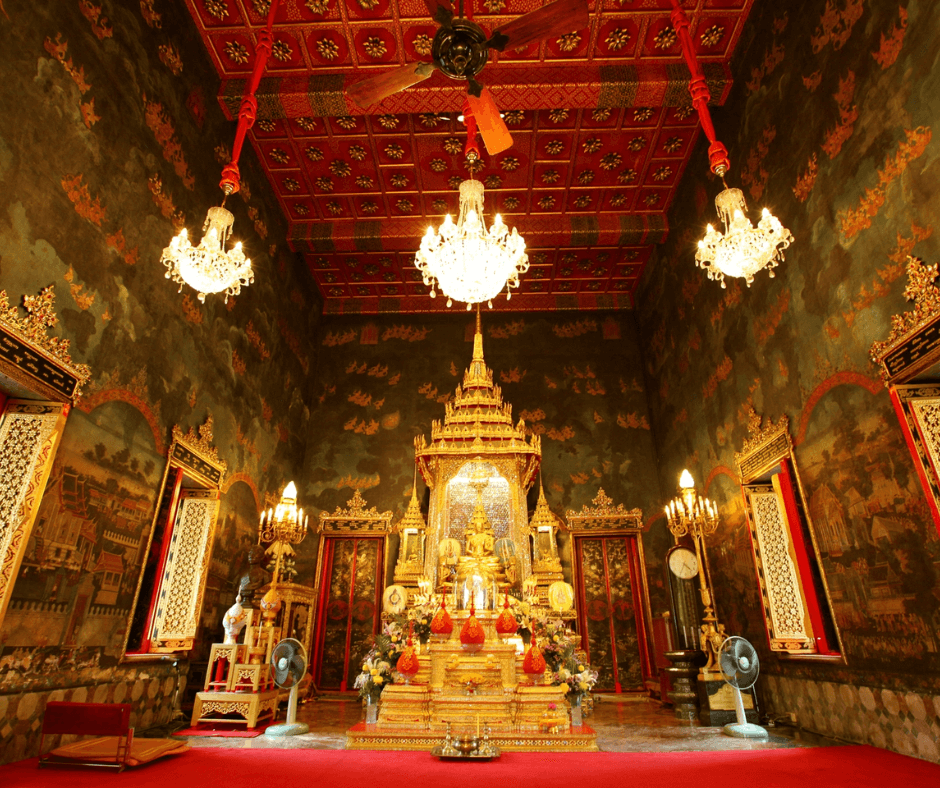 The hall’s exterior walls are made from marble, and the main door is adorned with gold and gemstones. Thai people believe this door will bring good luck and wealth to those who touch it. The inside of the ordination hall features a large, blue-colored Buddha image backed by a mosaic of mirrors. The walls are painted red and gold, and there is an elaborate ceiling with colorful stripes.

Take note that the hall is open only on Buddhist holy days. The temple recommends that you try to attend services or events on Sundays or days when there are ceremonies or events taking place.

How to Get There

The temple is small and tucked away behind Saranrom Park, not far from the Grand Palace and Wat Po. The easiest way to reach Wat Ratchapradit is by boat. This will allow you to avoid the notorious traffic in Bangkok. You will need to take a boat that stops at the Tha Thien Pier and then just walk through the market to arrive at Wat Ratchapradit. There is no admission fee for visitors who can enjoy all of the temple’s sights and sounds without dealing with traffic congestion. Alternatively, you can see Wat Ratchapradit as part of our Bangkok Old Town E-Scooter Tour