Thai Buddhist holidays make up a number of the public holidays on the Thai calendar, find out with us the most significant ones and their meaning!

Buddhism is Thailand most widespread religion, influencing many facets of the country’s culture. Considering that Buddhism is practiced by almost 90% of the Thai population it’s no surprise that Thai Buddhist Holidays populate the calendar, you can realize how important Buddhism is in Thailand. There are a few important Buddhist calendar dates that travellers should be aware of. Makha Bucha Day, Visakha Bucha Day, Asahna Bucha Day and Loy Krathong are the three most important Buddhist holidays. Thailand has declared all of them to be national holidays. Government offices are closed on these dates, despite the fact that banks and many other companies are open. There are temporary limits on alcohol sales, as well as the closure of entertainment venues in some locations. 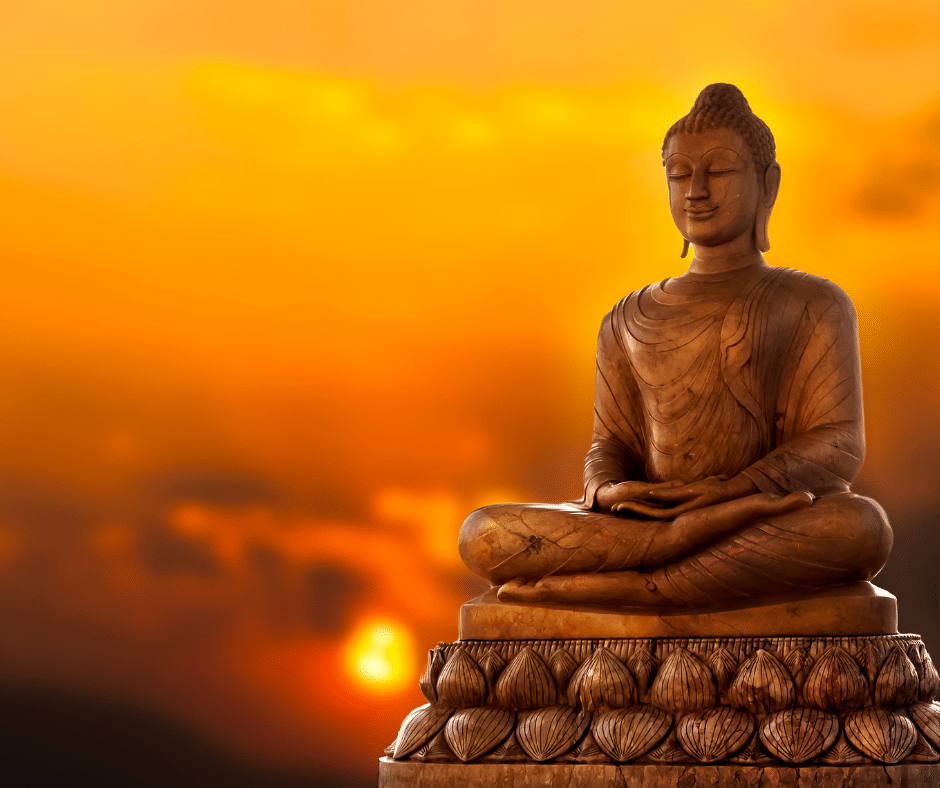 This is an important Buddhist holiday in Thailand. The legend says that on a full moon night, 1,250 enlightened disciples of Buddha gathered without being summoned and listened to Buddha’s teachings. The Buddha himself ordained all of the monks in that occasion. During this event Buddhists visit temples to make merit and participate in candlelight processions, also known as “Wian Tian.” 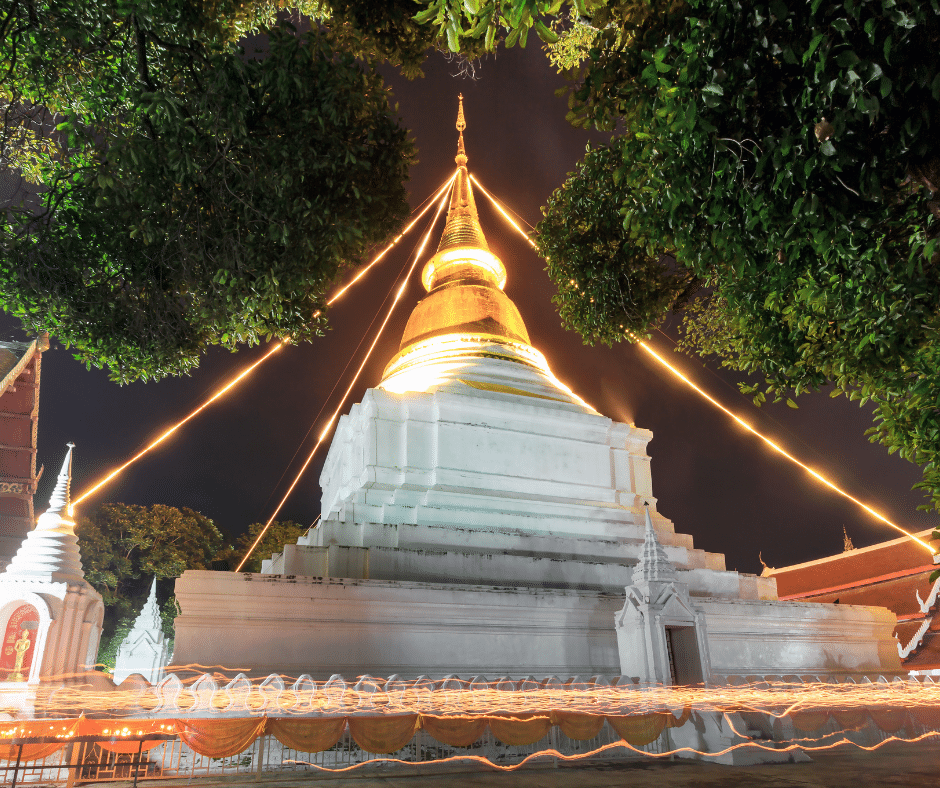 Makha Bucha Day is observed in a number of nations, including Cambodia, Laos, Sri Lanka, and Myanmar, and Thailand. It was initially commemorated in modern-day Thailand during the reign of King Rama IV. It was initially exclusively seen in the grounds of the royal palace, it has since then gained national recognition.

The origins of Makha Bucha Day, can be traced back to 45 years before the Buddhist era began and nine months after the Buddha is claimed to have attained enlightenment. According to Buddhism scholars on the third month’s on a full moon day (today known as Makha Bucha Day), Buddhist teachings claim that the Buddha and his followers met for the first time, marking an historical occasion.

Visakha Bucha Day is generally celebrated in May or June 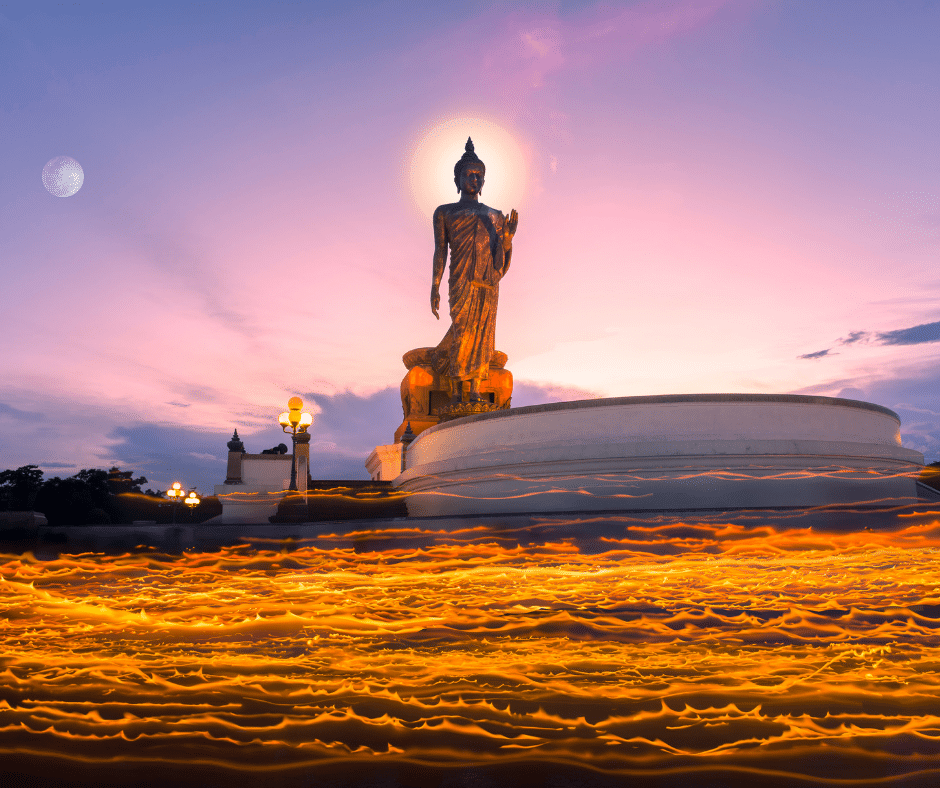 Visakha Bucha Day commemorates Buddha’s birth, enlightenment, and ascension into Nirvana. There are Buddhist ceremonies at temples, and the sale of alcohol is restricted. Relevant to this significant ceremony there is another important event which is the Buddha Purnima also known as Buddha’s birthday, the holiest day in the Buddhist calendar. It is the Buddhists’ most important event, which is celebrated with considerable zeal. Vesakha Bucha falls on the first full moon night of the fourth lunar month in the Chinese calendar. In the Gregorian calendar the date changes from year to year, but it takes usually place in May. Buddhists have been commemorating Buddhist festivals for millennia, but the decision to commemorate this day formally was made only in 1950 during the World Fellowship of Buddhists’ first conference in Sri Lanka. Although every full moon is sacred to Buddhists, the moon of the month of Visakha is particularly significant since it is on this day that the Buddha was born, acquired enlightenment (nirvana), and died, achieving parinirvana (nirvana after death of the body). 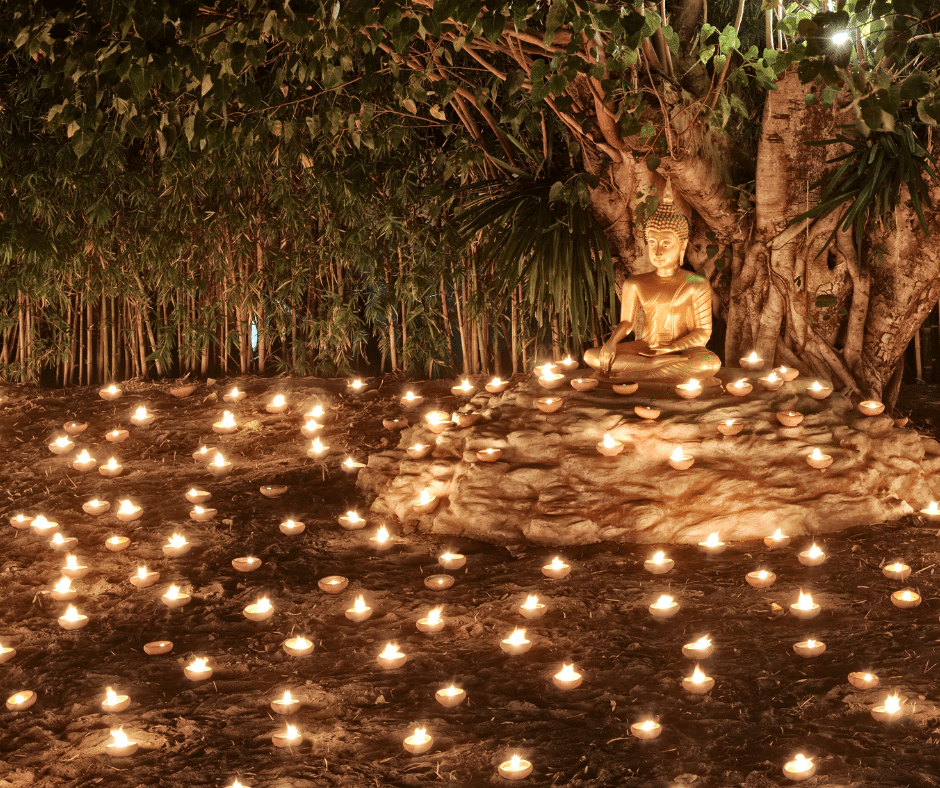 Shakyamuni Buddha, the historical founder of Buddhism, was born over 3,000 years ago in what is now Nepal. There are differing opinions on the exact dates of his birth and death, but he is supposed to have been born on April 8, 1029 BC and died on February 15, 949 BC, according to Buddhist tradition, however other Buddhist scholars place his birth five hundred years later. Shakyamuni Buddha was the son of the Shakya king, a clan whose realm was located at the foothills of the Himalayas, fifteen miles south of Kapilavastu, in what is now central Nepal. Shakya of Shakyamuni is derived from the tribe’s name. His surname was Gautama (Best Cow), and his given name was Siddhartha (Achieved Goal), though some academics believe this was a title bestowed on him by subsequent Buddhists in recognition of his enlightenment. Although many Buddhists commemorate Buddha’s historical birth on April 8th, the actual date is unknown, despite the fact that recent archaeological and historical research proves that Prince Siddartha Gotama lived during that period. People wear white garments and give away kheer (rice pudding) on Buddha Purnima because, according to mythology, a woman named Sujata once gave Gautam Buddha kheer on his birthday, and it has since become a custom. During Vesakha Bucha, the dharmacakra, or dharma wheel, is a common emblem. It is an eight-spoke wooden wheel. Buddha’s teachings on the path to enlightenment are represented by the wheel. The eight spokes represent Buddhism’s noble eightfold path. 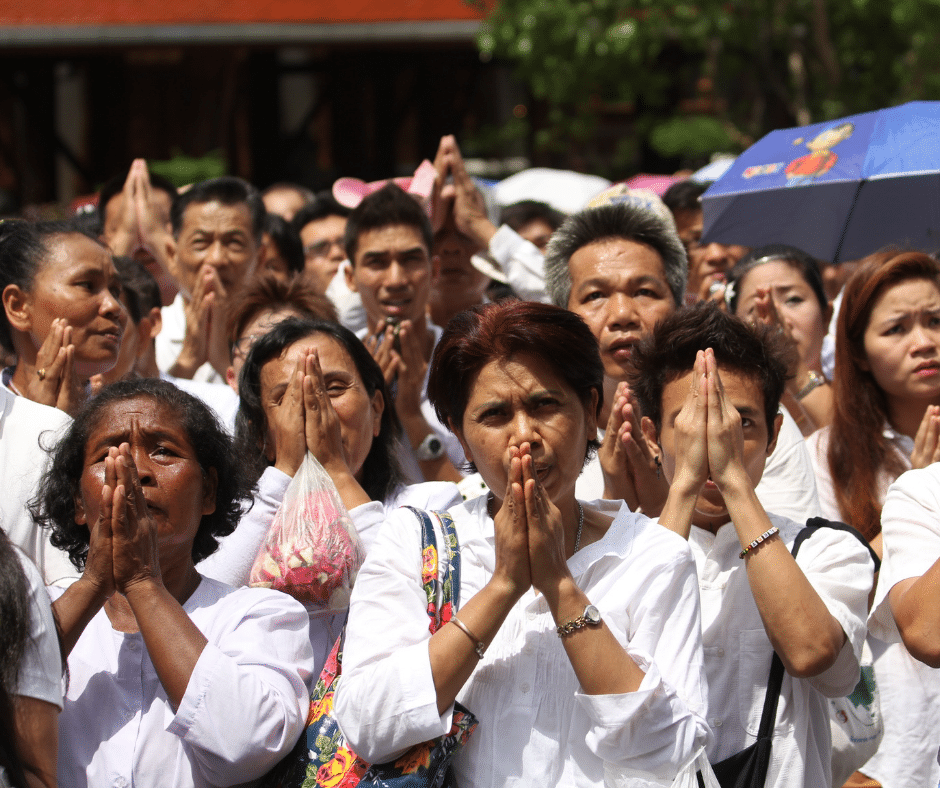 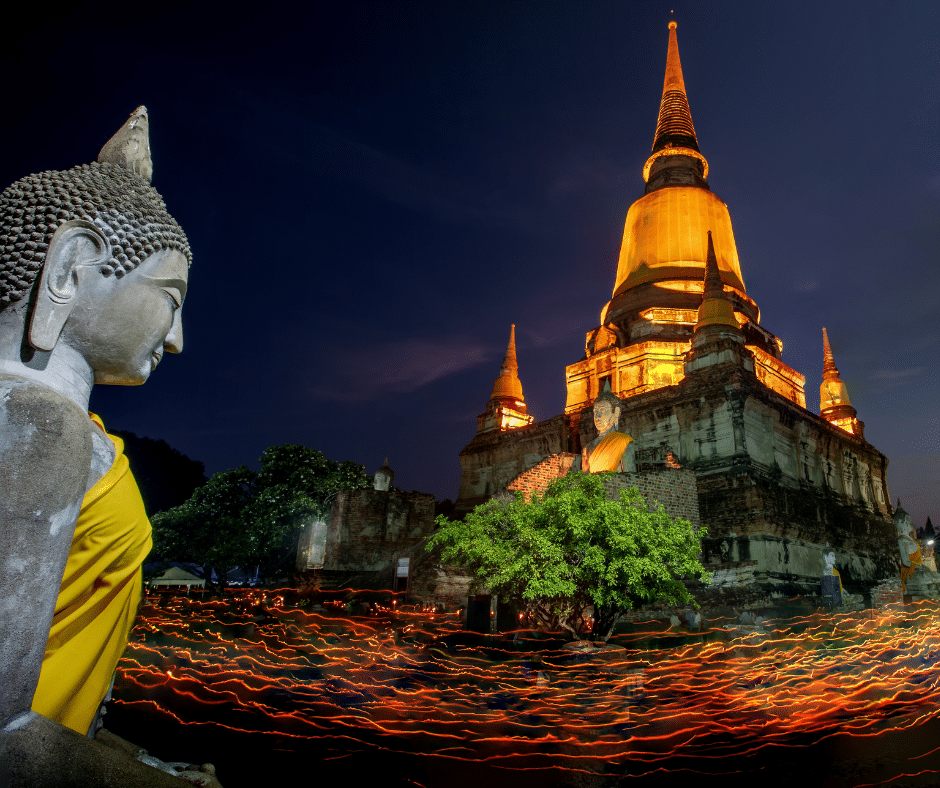 The Buddha’s first sermon to his first five disciples is commemorated on this Buddhist holiday, also known as Dharma Day. Dharma refers to the Buddha’s teachings. On the first full moon of the eighth lunar month, this Buddhist celebration is held. Ceremonies are held in Buddhist temples all around Thailand to commemorate the day. Many Thais come to their ancestral homes to make temple offerings and listen to sermons. They often undertake a rite called ‘wian tian’ in the evenings, in which they walk clockwise around the temple’s main shrine holding a candle, incense sticks, and lotus flowers. Monks chant mantras and preach the Buddha’s first speech during the day. Local monks parade through town with their alms bowls. People place flowers in their bowls instead of the typical food offerings. The monks then return to the temples offering flowers to Buddha. Asahna Bucha Day is a traditional day for young Thai males to enter the monastic life. 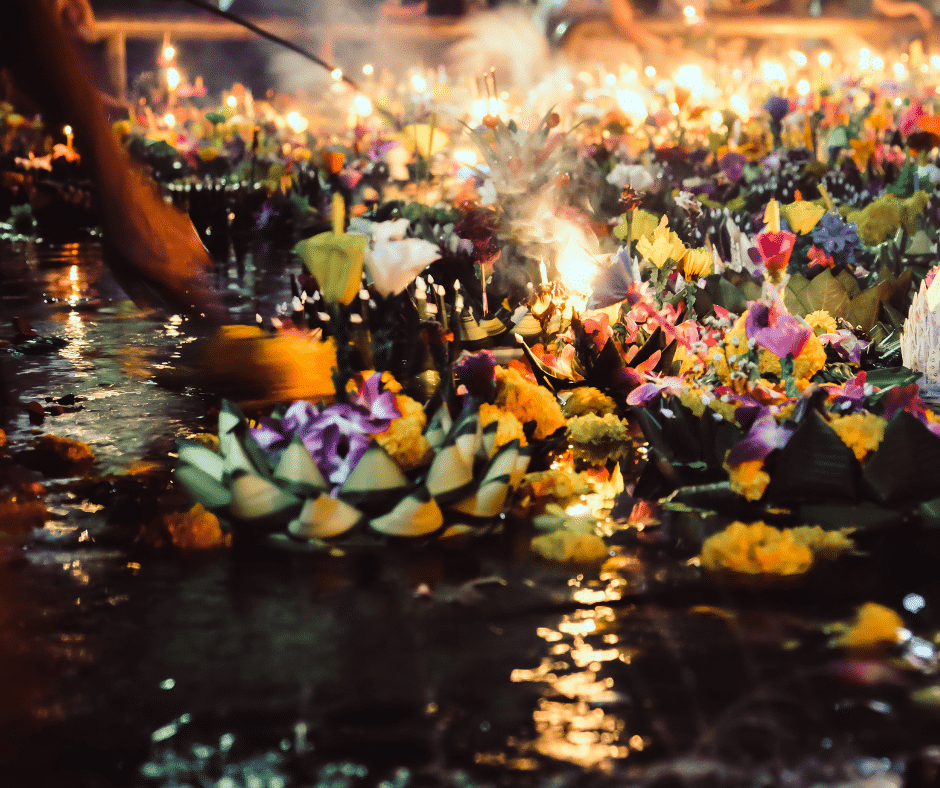 Loy Krathong is the second most well-known Buddhist holiday, following the Songkran New Year’s celebration. Krathong refers to the little container made of banana leaves that can be floated on the river during the Loi Krathong Buddhist festival. Loy means “to float”. For more information on this beautiful Thai festival feel free to check our Loy Krathong article.