Besides eating rice, noodles are our another popular food when it comes to satisfying your taste buds. In this Thai noodles guide we have listed all the different kinds of noodles you are likely to encounter during your trip to Bangkok. Check it out!

Besides eating rice, noodles are our another popular food when it comes to satisfying your taste buds. In this Thai Noodles guide we have listed the different kinds of noodles you are likely to encounter during your trip in Bangkok.

Tasty bowls of pork or beef noodles can be ordered from a variety of noodle stalls throughout the city of Bangkok. Both these forms of noodles are known with the name of “Gu-tiaw rua”. The vendor will normally add cow’s blood or pig’s blood to the boiling hot broth, which is made from rice noodles and sweet basil, combined with the meat of your choice (“Moo” for pork or “Nua” for beef). This is what thickens the broth while also adding richness and a dark brown color. This dish is special as it comes in very small portions and it is sold at a very low price. 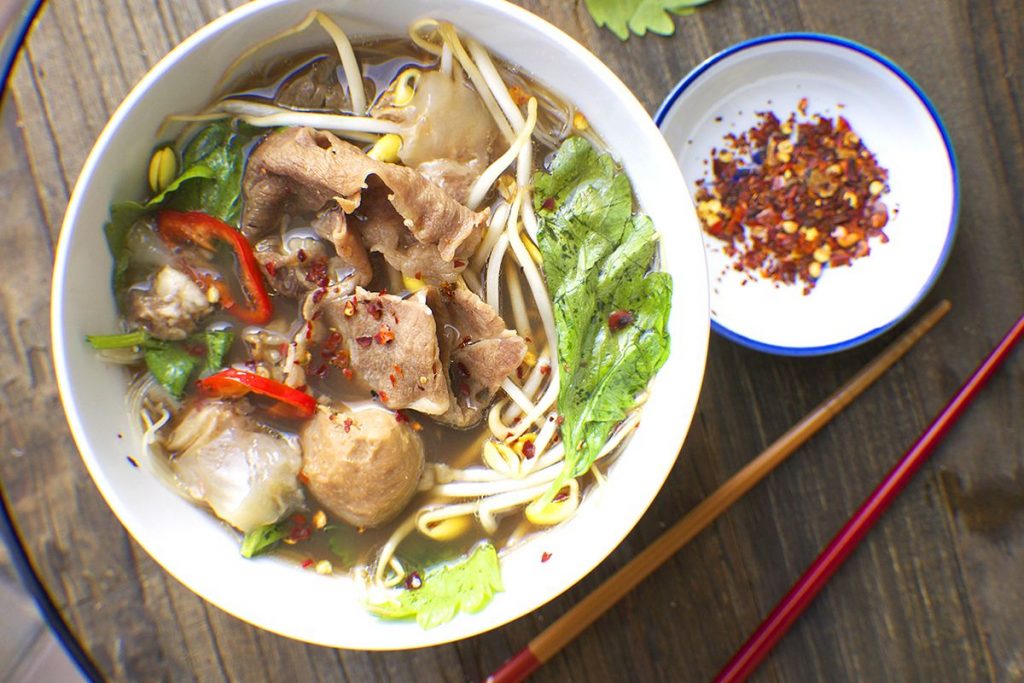 Toy Kuay Teow Reua near Victory Monument is a legendary eatery if you are into Kuay Teaw Reua. Mr. Toy, the current owner’s father, began selling boat noodles from his canoe in 1958, when the area was still a bustling port. What makes the restaurant so special today? Toy Kuay Teow Reua, serves some of the tastiest boat noodles in the city, with generous portions. The version with sliced fatty beef belly is our favorite. Also, worth a try are the spicy Tom Yum boat noodles (all at 15 THB).

In Thailand, this is one of the most common dishes served at lunchtime. The best thick rice noodles are used to make “Raad na” but it can also be made with egg noodles or vermicelli. A thick, dark sauce is added after the dish is lightly fried in oil, giving the dish its brownish color. Garlic, marinated meats, soybeans, and other vegetables are used to make the sauce, which gives it an exotic, sweet flavor. 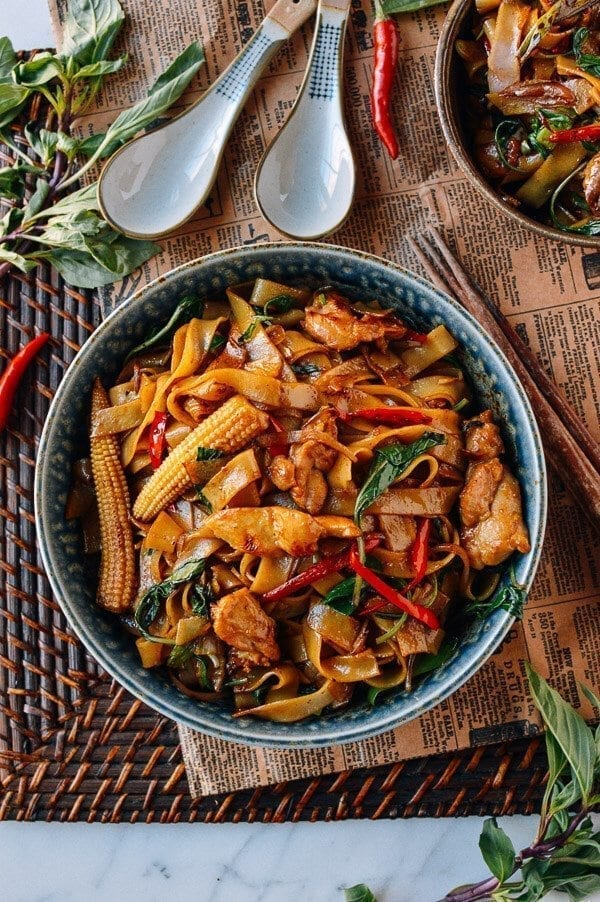 Bangkok’s best “Phad-Kee-Mao Talay,” or “Drunken Noodles with Seafood” is served at the world’s only Michelin star-awarded street food restaurant. Why is this bowl of drunken noodles so unique? The products are of excellent quality, far surpassing that of your average drunken noodle’s vendor. You can tell you’re in for something special just by looking at the big prawns, squid, and crab meat. The drunken noodles are flavored with basil leaves, fresh chilies, and a rich gravy, and they are far superior to the usual 40 THB takeaway Bangkok noodles. However, we understand if the prices here seem a little high to you as we are paying for the premium ingredients, and of course, for eating at world’s only Michelin awarded street food restaurant.

Pad Thai is without a doubt Thailand’s most well-known noodle dish, and it may even be the country’s most well-known food. This dish is extremely popular among tourists, and you can easily find and order it no matter where you are in the world. This stir-fried dish is delicious, filling, and can be eaten at any time of day or night. It’s made with rice noodles, egg, various vegetables, chicken or shrimp, and a handful of fresh bean sprouts. 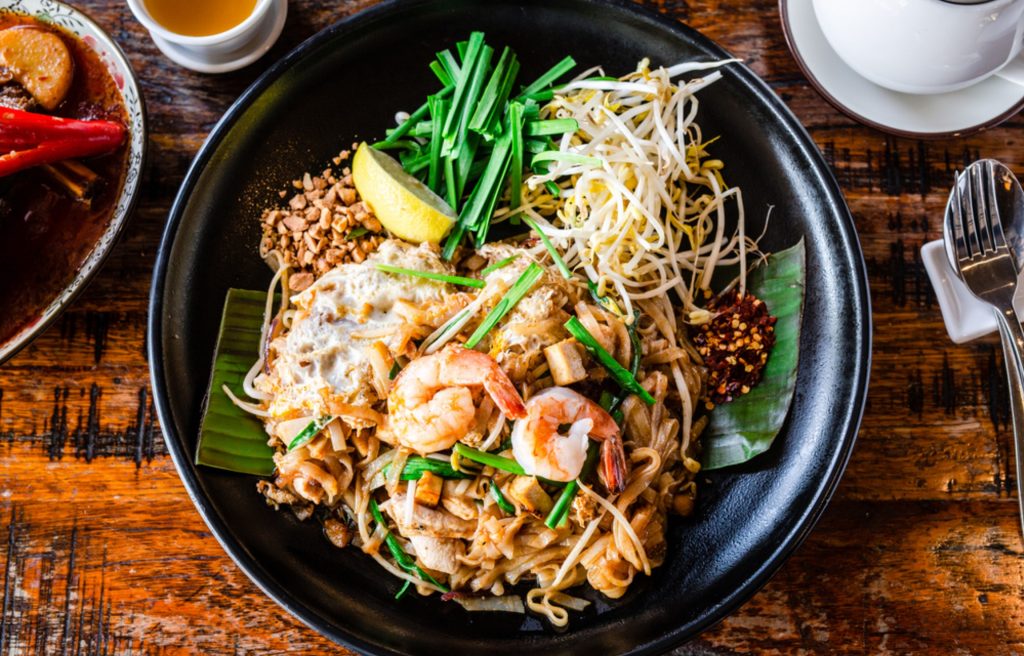 Thailand’s most popular and longest-running Pad Thai restaurant is Thip Samai (Former: Pad Thai Pratoopee). Pad Thai Pratoopee is a truly authentic Pad Thai said a former prime minister who launched the national dish. This former Prime Minister is known for bringing his foreign guests to this restaurant, which has earned it a legendary status.

The restaurant is still incredibly popular today, with people queuing for up to an hour every night to get a seat. If you arrive before 18:00 or after 21:30, you will be able to pass quickly through the line. Pad Thai Thip Samai is a Pad Thai restaurant that serves Pad Thai wrapped in a thin omelette. They serve five different versions, ranging from a 60 THB Vegetarian Pad Thai to their premium 300 THB version which is prepared with prawns, crabmeat, dried squid and sour mango.

Nothing beats this savory bowl of egg wheat noodles with a thick and aromatic broth made with chicken stock, meat, and a few vegetables thrown in. Ask for “Bami nam,” then choose from a menu of mixed pork, chicken, duck, crab, or fish (pointing to the seasoning you prefer), then sit back and enjoy your generous portion of this Thai noodles. 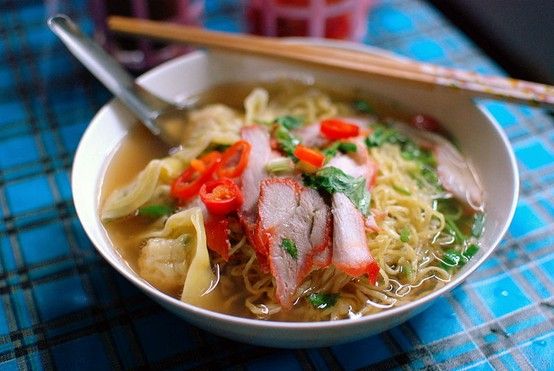 Uan Bamee Giew may be a small street stall, but it’s another Yaowarat crowd-pleaser for the locals. They specialize in ba mee, or Chinese-style egg noodles, as well as a number of wantons. Expect nothing written in English or a menu, but if you are not proficient in Thai that should not discourage you; simply point to what you want. The dish begins with a base of flash-boiled egg noodles, which can be served in broth or dry, with pork-filled wantons or slices of tender barbecue pork. Order your noodles without the pork broth and have it served separately in a bowl. Unless you arrive during the rush hours, you will not be disappointed. This place is worthy of being ranked in Bangkok’s top 50 street food stalls.

“Phat se-eu” is a scrumptious combination of stir-fried rice noodles, garlic, kale, egg, pork, and a very tasty soy sauce, all combined together to make a very wonderful tasting dish that goes well with everything.

The Michelin guide awarded Ann Guay Tiew Kua Gai was awarded a Bib Gourmand, and it has earned a place among Bangkok’s top 50 street food stalls. You don’t have to take our word for it; we believe you’ll enjoy the food at this Bangkok street food joint. They specialize in guay tiew kua gai, a less well-known relative of pad Thai. It’s made with soy sauce-wok fried rice noodles, spring onions, and chicken. It’s topped with a fried egg or an omelette according to preferences. The soft noodle dish gets its smoky flavor from the well-used woks and charcoal heat source. Though chicken is the most common, there are also seafood and ham versions available. It’s better served with a cold beer.